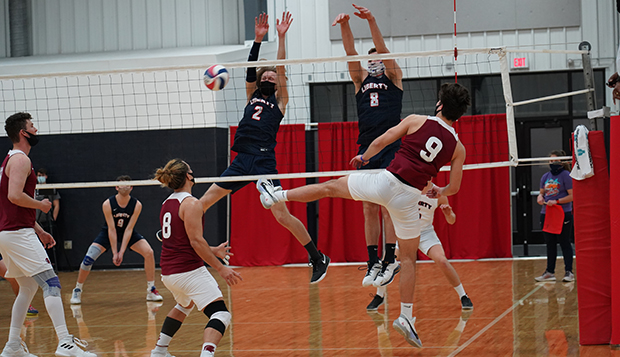 Sophomore middle hitter Tate Lapham (left) and senior outside hitter Sean Taggart go up for a block against SVU.

Less than two weeks after scrimmaging Southern Virginia University at home, Liberty University's men's volleyball team welcomed the Knights back to the LaHaye Multipurpose Center for an official best-of-five-game match on Wednesday night. The Flames rallied from a 2-0 deficit to force Game 4 before falling, 25-17, 25-21, 27-29, 25-19.

"That was rough," said junior middle hitter Luke Marine, who paced Liberty with 10 kills and five blocks. "We were playing sloppy. We beat them the first time in the preseason, but they came back here as a completely different team. We know what to expect now. When we travel to play them there next month, we'll be ready, we'll be sharper. Our lineup will be more set. I think we'll compete."

Flames junior outside hitter James Morton contributed nine kills and three blocks as well as consistent back-row passing, while junior setter Tommy Speelman provided exceptional jump serving. Liberty senior outside hitter Sean Taggart stepped up his game along with sophomore and junior liberos Tate Lapham and Cross Edwards on the back row, but to no avail.

"They came out really aggressive and made a lot more serves than they did a couple weeks ago," Flames Head Coach Kaleb VanDePerre said. "We came out pretty timid and didn't pass as well as we usually do, so we were scratching and clawing to stay with them. It's always fun to compete against them and see where we're at."

The Flames used a diving dig by Edwards and a cross-court kill by Morton to seize a 19-18 lead in Game 3 before back-to-back kills by Morton and Taggart and a block by junior opposite hitter Josh Knapp put Liberty up 24-23. Speelman and Marine combined on a stuff block and Morton and Marine spiked and dinked winners to clinch the 29-27 win that pulled the Flames back within 2-1.

"We made a few adjustments in Game 3 and they dropped off a little bit which helped us," VanDePerre said. "We couldn't execute defensively when it was tight in Game 4 to push it to Game 5. Part of it was our passing and how quickly they move around and run their offense in the middle."

"Our passing and our block weren't as good as we wanted today, so if we can get those two things figured out, and I know we will, then we'll be good," Marine added.

Liberty's DII team was swept by the Knights' much older lineup, 25-17, 25-17. The Flames got good production from Cooper Guillaume on the right side, freshman libero Mason Ellenberger, who raised his game to a new level to make eight digs, and freshman and sophomore middle hitters Jason Covey and John Sauder, who made three blocks apiece.

"We did not pass well, which made it tough to score," VanDePerre said. "When we passed well, we were able to score and match up with them, but they would go on a few runs with aces and when they got us out of our system."

Liberty (0-1) will next play March 5 at Carolina University, an NCCAA program in Winston-Salem, N.C., before potentially hosting that program or Virginia Tech at the Liberty Arena the following week.

"Right now, we're playing all NCAA and NAIA competition, which I love," Marine said. "I think it's better. It's more our speed, anyways. We'll be out on the court again soon and get some wins in March." 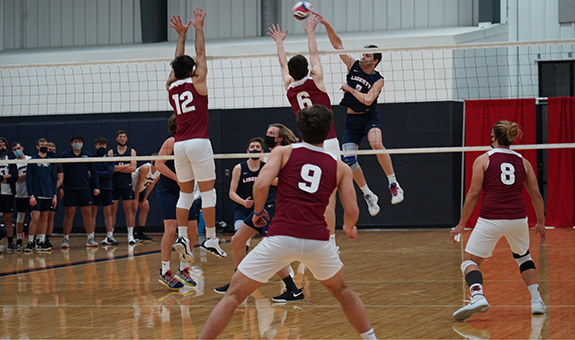 Liberty junior outside hitter James Morton spikes through an SVU block for one of his nine kills.