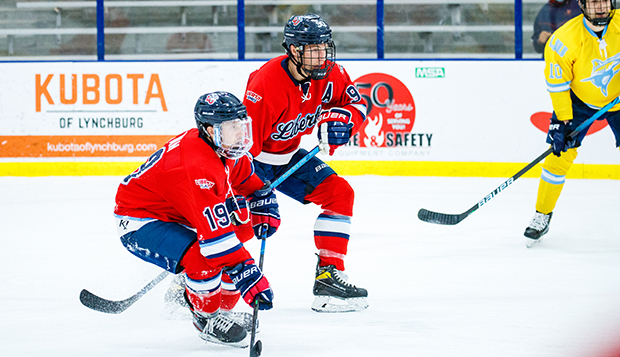 "It's early in the year and a lot of teams haven't played a lot of games, but it gives us some good motivation in our locker room to continue to improve, continue to work hard, and continue to climb up the rankings," Flames Head Coach Kirk Handy said.

Liberty (4-3), off to a 2-2 start in ACHA DI play and 2-1 against NCAA DI and ACHA DII opponents, had its series against ACHA DI Missouri State canceled this past weekend. The Flames will next face off for the third and fourth times against No. 7 Ohio on Friday, Feb. 26, at 7 p.m. and Saturday, Feb. 27, at 3 p.m. at the LaHaye Ice Center.

Handy said he is not concerned about the Flames' position in the rankings as much as he is about their' readiness for every game leading up to nationals, set for April 15-20 at the Maryville University Hockey Center in Chesterfield, Mo., where they need to be playing their best.

"Our whole focus is not on where we are ranked, but on getting better every day and continuing to improve, and I think if we do that the rankings will take care of themselves," Handy said.

Just 10 teams are ranked in the first poll since only 19 of 72 ACHA DI teams have played so far this season due to COVID-19 restrictions. Lindenwood (Mo.) University, a three-time national champion (behind only Ohio's four national titles among current ACHA DI programs), takes over the No. 1 ranking from Adrian (Mich.) College, which split its series against the Bobcats last weekend and drops to the No. 2 spot.

No. 3 Davenport (Mich.) University and No. 4 Calvin (Mich.) University, both 2-1 after splitting a series last weekend, are also ranked ahead of Liberty, which is one position ahead of Minot State (11-2-1) and three on top of Iowa State (10-3-1), who have played more games than any other ACHA DI team.

The final ACHA DI regular-season ranking, plus conference autobids, will determine the 20-team field for the 2021 ACHA DI National Championships. This will be the 10th year of the 20-team format and will celebrate the ACHA's 30th anniversary.

"We should know by the end of the week if we are going to get the autobid from our (ESCHL) conference," Handy said, noting that as of now, Liberty is the only ESCHL team playing. "If one more team plays, we will have a tournament" to determine the conference champion.