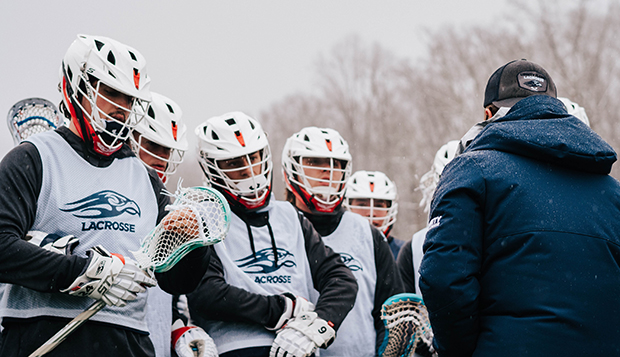 Flames players and coaches huddle up in the cold during Saturday's scrimmage at Southern Virginia University.

In the spring debut for both teams, played on SVU's turf field surrounded by freshly fallen snow, the Flames and Knights rekindled a rivalry after previously competing in the same conference as MCLA Division II programs in the early 2000s.

"It was a really good opportunity to test our guys against good competition," McQuillan said. "We got some good film and were happy with the opportunity as we head into a second scrimmage this Saturday (at 3:30 p.m.) at Roanoke College that we are super excited about as well."

He said SVU, which now competes in the NCAA Division III Capital Athletic Conference, has a much better program now than it did when he faced the Knights as a Liberty player.

"They have come a long way and it was a good opportunity to learn about ourselves," McQuillan said. "The weather was cold and it was our first scrimmage, which made it so it wasn't the cleanest game by either team. We did a lot of things right, though we returned to old bad habits in some areas."

While McQuillan and his staff expected the Flames' juniors and seniors to play well as leaders on the team, they were pleasantly surprised by the performances of many of their younger players and freshmen recruits. Senior goalie Ryan Reynolds turned in a stellar performance in the cage against SVU while sophomore midfielder Remy Newton and freshmen middies Stephen Westlake and Keaton Mohs exceled in sparking the Flames' offense.

"To see them play at such a high level as well gives a lot of optimism for the team about our potential to have a great season," McQuillan said. "The biggest takeaway was that we've just got some really, really good athletes. We've got talent up and down the roster and just an overall very strong group."

He is hoping for another evenly balanced battle when the Flames take on the Maroons.

"That's another team we've never played before," McQuillan said. "We're not really concerned about Roanoke and how good they'll be. We just want to stay focused on our game and working in the style we have coached our guys to play in. At end of the day, it will be wildly beneficial to get that test against a high-level opponent at the beginning of the year."

The Flames lost a scrimmage at NCAA DIII Hampden-Sydney last spring before starting MCLA Division I play at 6-0 and ranked fourth in the coaches poll. However, COVID-19 canceled the rest of their schedule and the SELC Tournament and MCLA National Championships.

Pending further pandemic- or weather-related cancelations, Liberty is scheduled to open its 2021 season with a first-ever matchup against Indiana University on March 5 at the Liberty Lacrosse Fields, where they will begin their first season of Atlantic Lacrosse Conference (ALC) play against East Carolina University on March 13.

Due to COVID protocols, the schedule is tentative and McQuillan said it may shift to home-and-away contests against ALC opponents. For example, before the Flames host Virginia Tech in their regular-season finale on April 24, they may travel to Blacksburg, Va., to challenge the Hokies in an early-season showdown with their former SELC Northwest Region rivals.