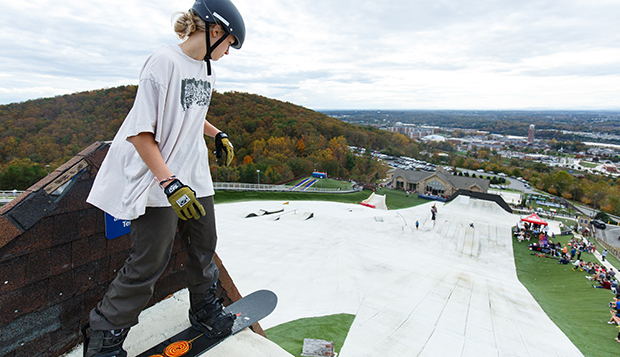 A snowboarder is set to launch on a Big Air run from Snowflex's highest chute at an Oct. 24 event. (Photos by Chase Gyles)

"They're calling for a little rain and a little snow, so I'll be curious to see what happens," Flames Head Coach Isaac Gibson said. "Snow would be more desirable as far as aesthetics of being in the environment, and we have had contests in the snow before which have been a lot of fun. But rain is usually going to make Snowflex perform a little bit better."

He said the worst surface condition on Snowflex's bristly plastic turf would be ice.

"Between Saturday evening and Sunday morning's contest, there is a good chance the slope could freeze, which would make conditions a little rough, depending on the severity of the ice," Gibson said. "If we get sections of frozen ice and sections of dry carpet, that makes it really tough and inconsistent in how it rides."

Regardless, the Flames and Lady Flames will have a home slope advantage on skiers and snowboarders from the University of Virginia, the only other team to register for the event by Thursday's deadline. Liberty will also have the numbers on the Cavaliers, who are entering 11 men and women in the two-day competition, compared to 19 for the Flames (10) and Lady Flames (9).

Coleen Leja, Liberty's first USCSA national champion last season in Lake Placid, N.Y., where she won both the slopestyle and the Rail Jam gold medals, is recovering from a fall on Tuesday, but is planning to compete this weekend. Fellow sophomore Emory Orlando has polished a variety of stunts and Gibson said she definitely has potential to challenge for the top spot, especially in the Big Air event. Junior Sam Pesile has made a lot of progression and should fare especially well in the Rail Jam, where freshman Emma Styron has also picked up some creative tricks.

In women's skiing, Liberty will be led by junior Taylor Keeren, sophomore Meghan Weigner, and freshman Caroline Mills, who has a ski background, but just began learning freestyle events in the fall.

"She has made a ton of progression on the rails and is really looking good," Gibson said. "We definitely have high hopes for her and Meghan is riding really solid, as well, and will be giving Caroline and Taylor a fight for top positions, especially In the Rail Jam."

On the men's side, the Flames will feature five skiers and five snowboarders, with seniors Cole Loomis and Eli Haita two of the favorites in the ski events along with sophomores Luke Linker and Max Ozanne and Matthew Grady, who will be making his competitive debut after coming to Snowflex for a number of years. Liberty's best snowboarders are junior Tyler Sherbine, senior Tyler Wilson, and sophomore Jesse Mast, who could sweep the podium in the Rail Jam with competition from senior Owen Hewitt and sophomore Ian Rosario.

This semester, Liberty has been traveling to Wintergreen Resort on Thursday and Friday nights to prepare for skiing and riding on real snow.

"A lot of the schools have basically decided not to compete this year (but) we've been making the best of the season, practicing and utilizing season passes up at Wintergreen to enjoy some of the fresh snow," Gibson said.

After having a scheduled USCSA event at Bryce Mountain canceled in early February, the Flames and Lady Flames are holding out hopes of competing in a Southeast Conference championship slopestyle contest at Appalachian Ski Mountain in Blowing Rock, N.C., on Feb. 27.

One trip that is definitely a go is a March 5-7 getaway to Seven Springs (Pa.) Resort, which donated weekend passes for the Flames and Lady Flames on Liberty's annual Giving Day, held Nov. 7.

"Seven Springs very generously donated passes to the team, and we are really excited to go to that mountain, which has one of the highest-rated parks on the East Coast every year," Gibson said.

He said the team is also finalizing details on a service trip to Snowshoe (W.Va.) Resort from March 18-21 to provide instruction to young skiers and snowboarders from churches from North Carolina.

"We are hoping to be able to make it happen," Gibson said. "It will be a church event with some worship services and a really cool opportunity to be a part of it. It would be good for the team to give back and change roles from being the athlete to actually helping to coach others and pour back into the community and to tell some young, up-and-coming skiers and snowboarders what Liberty has to offer."