Flames Prospect Camp May 20-21 at the LaHaye Ice Center 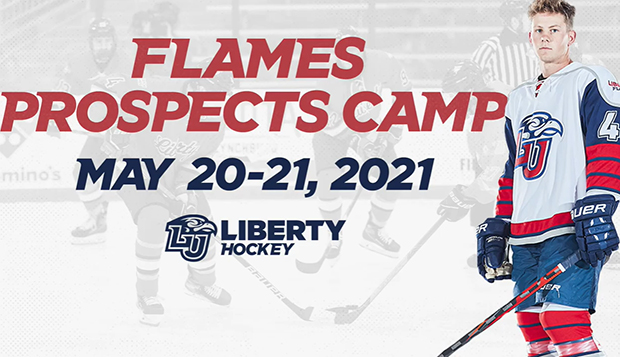 Liberty University's ACHA men's hockey teams will host their annual Flames Prospect Camp for players ages 15 and over at the LaHaye Ice Center from May 20-21, with registration opening next week.

"From conversations we have had with potential athletes coming in, we definitely expect this will be a highly competitive and talented group," said Flames DII men's Assistant Coach and Club Sports Recruitment Graduate Assistant Matt Cruickshank.

Last year's camp was pushed back from April, when it would have been held in conjunction with College For A Weekend, to June due to COVID-19. But it still attracted approximately 100 players from around the United States.

"We would allow people from Canada to come, but with all of the quarantine restrictions, it would be difficult," said Cruickshank, who is originally from Ontario. "Last year, we were surprised at the numbers we had. With the pandemic, everyone's looking for ice time and people want to come, so it's an opportunity for us, but we have to be careful with it."

He said all health-related protocols will be observed at the LIC throughout the two-day camp.

"We are definitely going to make sure we are monitoring the flow of traffic into the rink and all the locker rooms will be capped out at a certain number to allow for social distance," Cruickshank said. "Wearing masks will be mandatory walking around in the rink."

He hopes to see current players still in town help fill out rosters, less than a week after Liberty's virtual Commencement ceremonies for the classes of 2020 and 2021. All of Liberty's DI, DII, and DIII coaching staffs will watch players — divided into three groups for rotating ice sessions based on skill level and age — play two games per day for a total of four ice times per player.

"When you've got 100 athletes, you want to make sure every player is getting the correct exposure that they deserve after coming in from all over the country," Cruickshank said. "There is always potential for commitments at (Flames) Prospect Camps, which are also a great opportunity for people to come in and talk to the coaches so they understand when they come in here where they might play (DI, II, or III). We make sure every player is communicated with, we watch every player, and give them feedback so they understand."

He said the camp is an excellent chance for players to get noticed while being immersed in the student-athlete experience.

"Everyone gets to come together and showcase their abilities, which is what they've been training for," Cruickshank said. "Some players have come to Prospect Camp for the past three years and you get to see how they've developed and to see them grow. It's also a testimony to Liberty, for those who came to a Summer Hockey Camp when they were young and made the choice that they wanted to play at Liberty."

"Everything I've experienced at Liberty, from going to Africa, to meeting my future wife, to getting a great degree, started at Prospect Camp," said Cruickshank, who will be married the weekend after this year's camp. "It was life-changing. At the time, you may not think so, but it's the start of something great. It's far more than just hockey."

He plans to be in contact with the Hancock Welcome Center staff to see what tours and academic or student activity options are available around campus on those days.

"We want all of our prospective athletes, whether as a DI or DIII player, to see and experience what life at Liberty is all about," Cruickshank said.