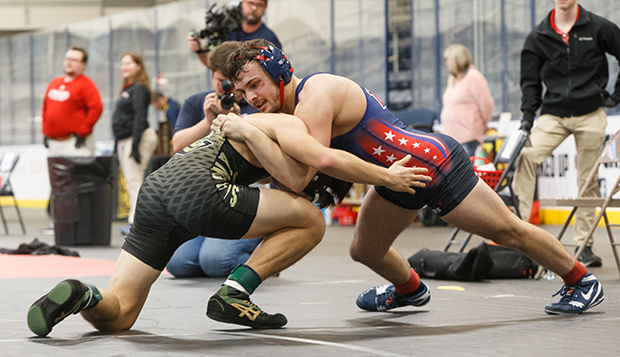 Facing the 15th-ranked NCAA Division III program in the nation, Liberty University's men's wrestling team battled undefeated Averett University in a dual match that could have gone either way, Wednesday night at the Grant Center in Danville, Va.

Averett improved to 10-0 with its first-ever victory over the Flames (2-3) as Cougars senior Sam Braswell set the tone for the night with a 14-4 major decision over Liberty sophomore Dante Minnino at 125 pounds, becoming Averett's first wrestler to eclipse 100 career wins.

At 133, Liberty freshman Logan Robertson scrambled from behind to upset Cougars junior Joseph Jones, who had won their previous matchup this season by technical fall at the Flames' season-opening Star City Classic in Salem. Jones scored the first takedown on the edge of the mat and added two back points before Robertson escaped with 10 seconds left in the first period. However, Jones responded with a last-second takedown to seize a 6-1 advantage. Robertson escaped in the second period and scored a takedown at the start of the third before Jones was twice called for stalling, tying the match at 6-6. In the final 20 seconds, Robertson twisted Jones to his back twice to clinch a dramatic 10-6 decision.

Cougars senior Brandon Woody, who ranks first in Averett history with 26 career pins, sandwiched three first-period takedowns around two escapes by Flames freshman John Stuart, tacking on four back points to take a 10-2 lead into the second period of their 141-pound match. He went on to put Stuart away by 22-3 technical fall in the second period to stretch the team lead to 9-3.

Flames freshman Brandon Ahlemann nearly pinned Averett's Tony Blackman at the end of the first period of their pivotal 149-pound bout. He held a 6-0 lead going into the second before allowing Blackman to score a reversal and win by fall at the 3:07 mark, boosting the Cougars' team advantage to 15-3.

At 157, Liberty senior Chad Cantrell stemmed the tide, taking a 3-1 lead on Averett freshman Tommy Baldwin with an escape to start the second period and extending it to 5-1 with a quick takedown. He allowed Baldwin to escape before taking him back down for a 7-2 advantage. In the final minute and a half, Cantrell recorded three more takedowns to win by 14-6 major decision, bringing the Flames back within 15-7.

Another critical match came at 165 pounds, where Flames sophomore David Over, who had dealt Alex Turley (12-1) his only defeat on Jan. 16 in Salem, opened an early 2-0 first-period advantage before allowing Turley to reverse for a 3-2 lead. Over added two more takedowns for a 6-5 lead before Turley escaped and turned Over briefly to his back to go up, 8-6, in the final seconds of the second. Turley dominated the third, winning by 13-6 decision, his first of the season after posting 11 pins.

Mosely pinned Liberty sophomore Ethan Martin in the second period of their 174-pound match for his 12th win of the season, and 10th by fall, extending Averett's advantage to 24-7.

At 184, Flames junior Blake Barrick, who had pinned two Cougars at the Star City Classic, opened a 2-0 first-period lead on Zion Carpenter (10-3), who had won all 10 of his matches this season by pin. Barrick escaped in the second and third periods to double his lead before scoring a takedown on the edge of the mat to go up 6-0. Barrick allowed Carpenter to escape before taking him down again and pinning him to bring the Flames back within 24-13.

Liberty sophomore Josiah Murphy was awarded a quick takedown in the first period of his 197-pound match against Jamar Christian, who managed escapes in the first and second periods to tie it at 2-2. Murphy escaped early in the third to go back up, 3-2, and avoided a near takedown to remain in the standing neutral position. The decision brought the Flames back within 24-16, but by avoiding a technical fall or pin, Christian clinched the team victory for the Cougars.

At heavyweight, Flames junior Jeff Allen and Averett sophomore Trent Ragland traded escapes in the first and second periods and were locked in a 1-1 stalemate at the end of regulation, sending the match into overtime. Ragland was awarded the winning point for a 2-1 decision, for the final 27-16 score.