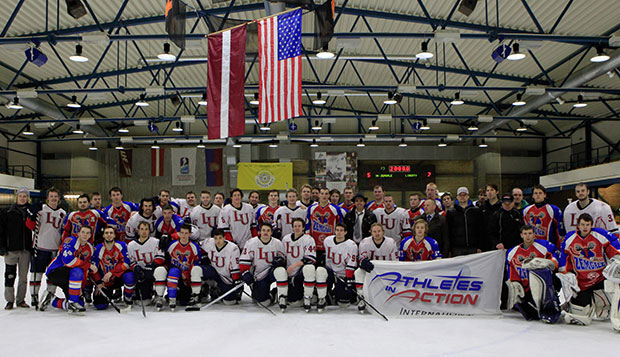 Liberty's 18 team members and their coaches pose with a Latvian team they played and representatives from Athletes in Action of Russia under the Latvian and United States flags.

Assisted by Athletes in Action, 18 members of Liberty University's Division I men's hockey team had a unique opportunity to showcase their stick skills and share the Gospel during a seven-day sports-oriented mission trip to Latvia over spring break.

The Flames dispelled notions about their faith conflicting with the sport they play and helped lay the foundation for future outreach ministry efforts in the region.

"In Latvia, they think if you play a sport there that you can't be a Christian as well," said Liberty defender Scott Morongell, a senior from New Jersey.

Flames assistant coach Jeff Boettger said the misconception may be closer to the truth in the Latvian culture.

"There are not many Christ followers in a world dominated by people just pursuing the love of the game," he said.

Liberty's players demonstrated, however, that the term Christian athlete is not an oxymoron — they can serve God and play a sport with passion.

"We're a hockey team, we're all men of Christ, we're all Christians," Morongell said. "You can fulfill your sports desires as well as be a Christian man of God, like Jesus."

For Morongell, who took part in his first mission trip, the experience was life-changing.

"It was a great time," he said. "All the guys, I think, would agree with me that it was an awesome trip. You grow a ton spiritually whenever you do one and exercise your faith."

Boettger said the trip sharpened the Flames' spiritual perspectives and made them more intentional about what they are doing from a ministry standpoint as ambassadors for Jesus Christ, and Liberty.

"Absolutely," said Boettger, who previously took teams to Sweden in 2007 and Chuvashia, an Eastern republic of Russia, in 2009. "Sometimes, you have to be taken out of your comfort zone, exposed to a different way of living or a lifestyle, before you can get outside of yourself and your own paradigm and learn how your Christian faith should be integrated into everything you do, whether it's athletics or the workplace or the family."

He brought his entire family, including two young children.

"We want them to catch the heart and the vision for ministry and integrating the family and faith," Boettger said.

The team first visited an orphanage and met with two area youth groups before playing three hockey games against select squads — one featuring a member of the Latvian national team — winning the last two after losing the first as they recovered from jetlag.

"After the games, we met with the teams and had a dinner and we got to share what Liberty was and what our team's all about," Morongell said. "We went there kind of with the mentality that God gave us these hockey gifts and we can use it as a source of credibility to share to others that, ‘Hey, look, this is what we do,' and kind of get people to listen."

Though they didn't always understand each other, even through Latvian translators, they were able to establish relationships through the common bond of the sport.

"All of the teams were so accommodating," Boettger said. "We'd have a sit-down sharing time over food and we couldn't always communicate real well through language, but hockey as a sport was the unifying thing we compete in."

He said several members of the Flames became Facebook friends with players from opposing teams and enjoyed fellowship while bowling in the hotel where they stayed the last day.

"The key was to make yourself not an opponent or a rival, but a human being to allow connections to be built," Boettger said. "We showed them what it means to be a Christian athlete and, Lord willing, they were able to see the truth and hear the truth."

Liberty's travels were well promoted on the Internet and in news interview segments aired on TV prior to their three games in Daugavpils, the second-largest city in Latvia, Tukums, and Ielgava.

"There was so much positive media coverage of the games and what we were sharing about our faith," Boettger said.

"Everybody knew we were coming so everywhere we went, we handed out a hockey brochure that said who we are and what we stand for, " Morongell added. "Every place we went was packed and everybody who went to the games got one of those cards, so they could see that, ‘Oh, these guys have Jesus in them as well as play hockey.'"

Boettger said the trip, facilitated by John McIntosh, a businessman from Canada who lives in Russia, helped lay the groundwork for future Athletes in Action ministry opportunities. Victor Podluzhny, the director of Athletes in Action in Russia, is working with Oleg Sudarev to start the process of launching AIA in Latvia.

"Churches are key because they're there," Boettger said. "Not a lot of them know what it means to partner up sports with reaching out to people. Giving a vision for those churches and pastors to use sports as an outreach was an integral part of the trip. They are going to allow Athletes in Action to do more outreach in those cities. You never know the ripple effect."