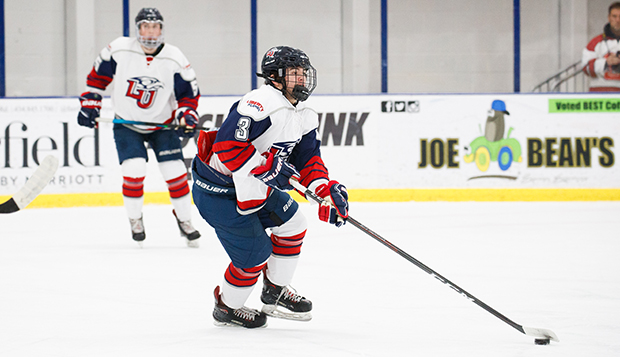 Just under 10 minutes into the first period, Flanders started the scoring by controlling the puck off the faceoff in the neutral zone, deking around a defenseman, and beating East Texas Baptist goalie Tyler Fitzgerald from the right crease with a wrist shot into the top left corner. Just over two minutes later, junior forward Timothy Doe collected a pass from Flanders out of the corner in the left circle and maneuvered around the defense in front before firing a sharp-angled shot from the right side past a diving Fitzgerald into the upper netting.

Freshman forward Roman Lamoureux netted his second goal of the semester off an entry pass from junior forward Justin Barstead less than two minutes later for a 3-0 advantage before Flanders finished a tic-tac-toe passing sequence from junior defenseman Maxx Mitchell and senior forward Michael Niederer with a wrist shot into the top-left netting for a 4-0 lead at the 6:00 mark of the first period.

Flanders completed his hat trick in the first period after taking an outlet pass from Niederer to the tape of his stick as he accelerated up the left wing before cutting back into the slot and lifting a one-on-one shot into the top left corner with 2:03 to play in the opening stanza.

With Liberty on a power play early in the second period, junior forward Darren Carter finished off a three-on-one fast break with a slap shot in the left circle off an assist from graduate forward Jerrell Campbell. Luke McFarlane extended the Flames' lead to 7-0 nearly single-handedly by sprinting up the left wing, wrapping around a defenseman and cutting into the right crease before beating Fitzgerald glove-side with a short-ranged shot into the top right corner.

Flanders netted his fourth goal with a slap shot from the top of the left circle, stretching the Flames' lead to 8-0 at the 4:34 mark of the second period. Carter then cut across the high slot a split second before a collision left bodies, including junior linemate Peyton Nash, in his wake as he skated wide and threaded a shot through the five hole from deep in the right circle midway through the third.

Senior forward Caleb Toone cleaned up the rebound of a shot by junior forward Charlie Wilkie blocked high by Fitzgerald and left out front where Toone tucked it inside the right post. Niederer capped the scoring on a wraparound rebound of Flanders' shot from deep in the left circle, from behind the right post.

Though he wasn't severely tested, Flames junior goalie Dakota Cyhaniuk completed his second shutout in the past three weekends.

The Flames picked up where they left off in Sunday afternoon's rematch, with Doe punching in the rebound from right out in front of a shot from Flanders in the left circle, beating Tigers goalie Nick Bozzuto for a 1-0 lead less than one minute after the opening faceoff.

Niederer then received an entry pass from Flanders in the left crease and lifted a wrist shot past Bozzuto top shelf as he was knocked to the ice for a 2-0 edge at the 14:55 mark.

Liberty capitalized on a shorthanded odd-man rush opportunity with Nash setting up Barstead with a cross-crease assist after Bozzuto came out of the net to try to clear the puck, extending its lead to 3-0 with 3:29 still to go in the first period.

East Texas Baptist defenseman Timothy Zittel ended junior goalie Stephen Sanders shutout bid just over a minute later by launching a shot from the high slot that rang off the crossbar and into the back of the net, trimming the Tigers' deficit to 3-1..

Freshman forward Trevor Graznow set up Carter on the Flames' fourth goal, sending a shot from the right circle into Carter who chipped it up and in from on the doorstep to make it 4-1 as a Liberty power play expired with 11:40 left in the second period.

Mitchell put the finishing touches on the series sweep later in the period, taking a backhanded cross-ice feed from Graznow along the right boards and sneaking a laser of a shot through the five hole for the game's final goal.

The Flames (6-3-2) will travel to Indiana for a two-game series at Trine University on Friday and Saturday before wrapping up the road trip with a Sunday showdown at Adrian (Mich.) College. Liberty, ranked third in the first ACHA DII national poll, will return to the LIC for a three-game series against second-ranked Lindenwood on Feb. 19-21 before concluding its regular season with a three-game showcase. March 5-7 at Lindenwood.