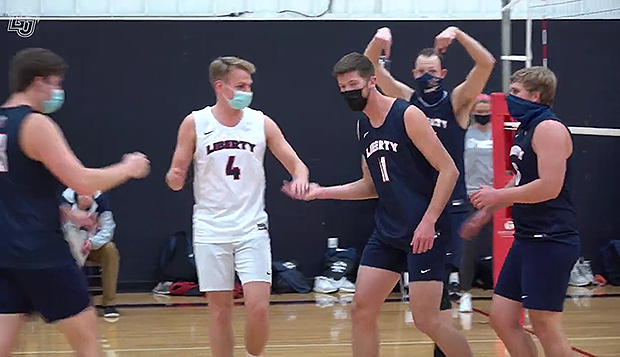 Liberty University's men's volleyball team opened indoor competition with a scrimmage against Southern Virginia University's NCAA Division III program last Tuesday at the LaHaye Multipurpose Center and came away with a brighter perspective on the season at hand.

"It was awesome to be back and see the guys competing," Flames Head Coach Kaleb VanDePerre said. "It was really great just to see a team other than ourselves, which has been the case for the last couple of months, and to play both our DI and DII teams. Southern Virginia brought two squads that we could compete with and test ourselves out early, which is what we want to do. We're hungry to try to get better and the way we do that is to play better teams."

Junior outside and opposite hitters James Morton and Josh Knapp were thrilled to take the court again for the first time since traveling to Richmond, Va., to sweep NCAA DIII Randolph-Macon last February.

"It's good to be back, that's for sure," Knapp said. "A little bit of rust from the start of the semester, just fitting in with the new guys that we've brought in. We didn't get much playing experience, and we've just been integrating as a team, most of the time, so it's cool to split up into two squads and figure that out. We have some chemistry (issues) that we're working on, but other than that, we have a lot of good players and a lot of good talent on the team, and that shows for itself."

Morton said after months of intra-squad scrimmages, the Knights challenged the Flames to raise their game to the next level.

"Playing each other is fun, but getting to play people that you don't know their playing styles is just a totally different experience, and we get to really test ourselves and our skill sets there, so it was definitely a blessing to have that opportunity," he said. "SVU is a great team, so we were really able to see how we do against a big block and good servers. We really did pass well and if we can keep that up, we can run our offense well. Defensively, we can learn little things, get some more digs, figure out how to go around and block a big hitter and how to dive in the holes and things like that."

VanDePerre was pleased with the Flames' overall performances in both best-of-three-game matches against the Knights.

"We passed unbelievably well," he said. "Our offense, with a few different wrinkles did a lot of things well and we've been putting things together that we think are our strengths."

VanDePerre has strived to maintain an others-centric team culture, exhorting his players to focus not on themselves, but on making each other better, both as teammates and brothers in Christ.

"In this season of COVID and the uncertainty of ‘Are we going to have nationals, as (ECVA) league play has been canceled,' there's a lot of tendencies that we get selfish," he said. "Keeping our focus on becoming the best version of ourselves and representing Liberty and Liberty men's volleyball well and continuing to get better are the big areas we want to keep working on."

Morton said a team Bible study implemented last season and carried on this year has helped the players grow closer together on a personal and spiritual level.

"We meet once a week and talk about where we are in life, where we are in school, and just try to grow closer to each other through Christ," he said. "It's really benefitted us. Anything we do off the court together we try to do, so when we come back onto the court, we're a fully meshed unit."

Knapp said the bond the team has developed off the court is evident when they take the court and battle opponents, as they are willing to sacrifice their bodies to keep points alive and pick one another up when they are down.

"It's a great brotherhood that we have, and we do a lot of extra activities and workouts together and we play for each other, not just ourselves," he said. "That keeps us pushing as hard as possible and just the accountability of everybody to do their job and do it right, to their fullest ability, that's what's fueling our team right now."

The Flames will return to the LaHaye Multipurpose Center next Friday, Feb. 12, to face Carolina University at 6 p.m. before hosting Lancaster Bible College on Feb. 13 at noon and Milligan University on Feb. 19 at 5:30 p.m. Liberty will pay return trips to Carolina and Milligan in March with a few more matches in the works before potentially traveling to Minneapolis for the April 1-3 NCVF National Championships.