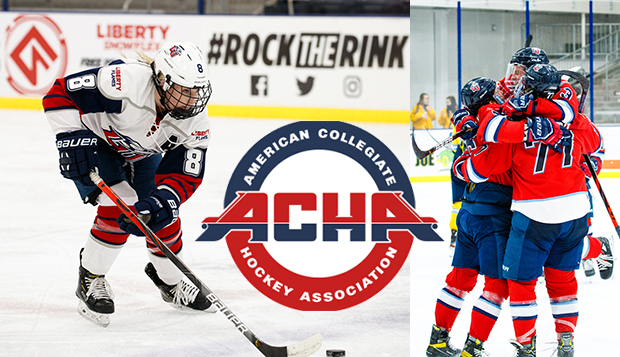 The ACHA Division I men's hockey National Championships will now be played April 15-20 at the Maryville University Hockey Center in Chesterfield, Mo. Previously, all five divisions of the ACHA (DI, II, and III men and DI and II women) were scheduled to crown national champions over the same dates at the New England Sports Center in Marlborough, Mass. However, after COVID-19 canceled the 2020 ACHA National Championships in Frisco, Texas, it forced the ACHA to move to smaller, division-specific tournaments this year, with the DI women's and DII men's events moved to Minot, N.D., and Bismarck, N.D., respectively.

The ACHA plans to resume combined National Championships from March 10 to March 20, 2022, at the Centene Community Ice Center in St. Charles, Mo., home of the NHL's St. Louis Blues' new practice facility, before moving back to Boston as originally planned this year, in 2023.

"We're excited to go to St. Louis," Liberty DI men's hockey Head Coach Kirk Handy said. "We haven't been to a national tournament there. It is a great spot and I'm excited to play. We have a lot of work to get there, though. We've got to earn the right to get there, starting next week, when we get back to playing at Ohio (on Monday and Tuesday in Athens, Ohio)."

Those will be the Flames' first two of possibly 8-10 matchups against the Bobcats this spring as Handy has had to fill out a schedule left with several holes due to many of its ESCHL opponents delaying the starts to their seasons.

Liberty's ACHA DI women's hockey team will travel to St. Louis twice — for a Feb. 18-20 showcase against Midland (Neb.), Lindenwood (Mo.), and McKendree (Ill.) universities and the March 26-28 Women's Midwest College Hockey (WMCH) tournament, with the winner earning an autobid to the ACHA DI National Championships, set for April 15-20 in Minot. That is the home of Minot State, one of the Lady Flames' top WMCH contenders which they defeated in the inaugural WMCH Championship Final.

Out of 11 ACHA DI women's teams that are up and running this semester, only six have played so far and all are ranked, with Liberty (5-1, 1-1 ACHA) debuting at No. 3 in the first ranking. The two-time-defending ACHA DI national champion Lady Flames are ranked behind Lindenwood (5-1), which it split its only ACHA series with to date, Jan. 23-24 at the LaHaye Ice Center, and No. 2 Adrian College (11-3), which canceled this past weekend's scheduled series against Liberty in Michigan. The Lady Flames are ranked ahead of No. 4 Minot, No. 5 Midland, and No. 6 Maryville.

Based on the final regular-season rankings, Liberty's ACHA DII men's hockey team will battle for one of 16 spots in that national tournament, set for April 15-20 at Schwan Cadillac Rink at Starion Sports Complex in Mandan, N.D., and Wachter Arena at Capital Ice Center in Bismarck. That is the home of the University of Mary's DII program that went 2-0-1 against the Flames in their season-opening series at the LIC from Oct. 22-24. The Flames debuted at No. 3 in the first national poll, behind only Mary and No. 2 Lindenwood, which they will host Feb. 19-21 before traveling to compete in the March 5-7 Lindenwood Showcase in St. Charles, Mo.

Meanwhile, the ACHA announced on Wednesday that there will be no DII women's national tournament this year. There has been no final announcement about a DIII men's tournament, but Flames' first-year DIII men's Head Coach Josh Graham is shifting his team's focus to a possible bid into the College Hockey Federation's (CHF) national tournament, tentatively set for April 9-11 in the Philadelphia area.

Liberty is planning to host the ACCHL DIII tournament on March 19-21, with a potential national bid at stake. However, after meeting with ACCHL representatives on Wednesday morning, Graham said that event may turn out to be more of a round-robin showcase tournament, with no champion declared.