DII Flames rebound from loss to salvage tie with Icepack 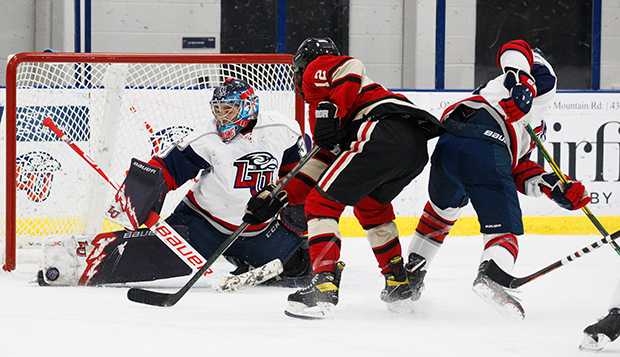 Junior goalie Dakota Cyhaniuk makes a kick save against the Icepack before denying all three of its chances Saturday night's shootout at the LaHaye Ice Center. (Photos by Luke Bobbey)

Twenty-four hours after giving up three goals in the third period of a 5-3 loss to North Carolina State at the Raleigh Ice Center, Liberty University's ACHA Division II men's hockey team dueled the Icepack to a 1-1 tie on Saturday night before winning a ceremonial shootout at the LaHaye Ice Center.

Freshman forward Roman Lamoureux, a spring semester addition to the Flames' roster, scored their lone goal in regulation almost single-handed with 1:58 left in the second period. He lifted the puck past an Icepack defender along the boards, springing himself for a fast break up the left wing before firing a shot past NC State goalie Joshua Cannon top shelf for a 1-0 advantage.

"He's a very skilled player and he knows what it takes to put the puck in the net like he did tonight," Liberty senior forward Michael Niederer said of Lamoureux the younger brother of former Flames DI forward Paul Lamoureux. "Tonight was kind of a breakout game for him and he stepped up and showed what he is capable of on offense. As he gets more comfortable with the group and our team, he's only going to continue to develop and get better."

Flames junior goalie Dakota Cyhaniuk chest blocked a point-blank shot by Joey Davidson in the left crease with just under 15 minutes left in the third period before Cannon stopped a breakaway counterattack and sprawled to save a second chance by Flames forward Blake Flanders.

Niederer nearly put away an entry pass from junior forward Tim Doe after Lamoureax had a breakaway opportunity blocked by Cannon. With the Icepack on a power play, Cyhaniuk made two quick-reaction saves of close-ranged shots in the slot with just over 3 minutes remaining in regulation.

NC State pulled its goalie with just over 2 minutes to go to give it a 6-on-4 advantage for more than 30 seconds before the Flames killed the penalty only to allow Alex Robinson to net the equalizer on a backhanded putback from the left crease with 1:08 left.

"We had a lot of penalties in the third period that that we had to kill and they were getting a lot of shots on us," Cyhaniuk said.

The Icepack (5-3-1) went back on the power play just 16 seconds into the five-minute overtime and pummeled Cyhaniuk with shots for the next two minutes, but he rejected every one to help the Flames (5-3-1) survive to the shootout, where he repelled all three attempts by Parker Szarek, Robinson, and Chris Solomon, who had netted a hat trick in Game 1.

"I love shootouts," he added. "I want to win no matter what and I'm glad we won in the shootout. It's a great victory, even though it's a tie on the scoreboard."

Niederer provided the game-winner on the Flames' first shootout try, maneuvering the puck around Cannon before sliding a backhander past him from the right side.

"He was pretty far out of his net so I knew if I could get him moving side-to-side, I had a chance," Niederer said. "They've improved a lot and every time we play them it's a battle."

Cyhaniuk was happy with the way his teammates responded after letting a 3-2 lead slip away in Friday night's defeat.

"It was one of those nights," he said. "It was a team loss. A couple of those I want to have back, but it doesn't really matter what happens afterwards. It matters coming to the rink today, shaking it off and going out there to compete the next day to get the win. We have a lot of stuff we need to work on. It wasn't our best weekend, but it's definitely adversity that's going to help our team become better later in the season. We know what we need to work on and we're ready for the future."