DII Flames start off flying with sweep of Eagles at FGCU 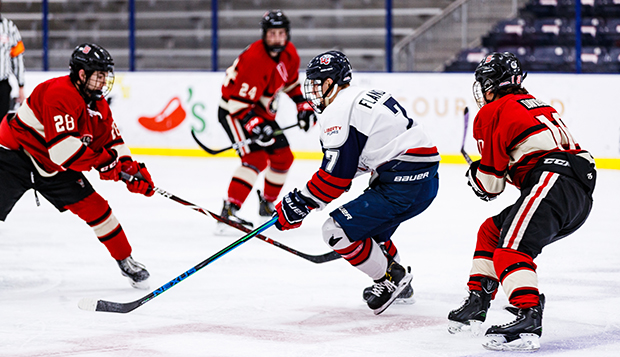 The Flames (4-2-1), who finished the 2019-20 season as the top-ranked team in the Southeast Region — ahead of the second-ranked, two-time defending national champion Eagles — dominated FGCU in the first game, 4-0, before winning the rematch, 2-1.

"FGCU always has one of the best teams in the country, but I felt really confident about our team with how we performed against the University of Mary and North Carolina State," Flames Head Coach Ben Hughes said, referring to Liberty's fall season opponents. "This was their first weekend of games, so you never know what to expect. When we see them again in March, they will be even better than what we saw this weekend."

Liberty was gifted back-to-back stellar performances from junior goalie Dakota Cyhaniuk, who made 32 saves in Saturday's shutout and 31 more in Sunday's rematch. The Flames took 32 shots on goal in the opening game, but managed only 27 on Saturday.

"On Sunday, they pushed the pace ever more than we did (but) we had outstanding goaltending," Hughes said.

The Flames netted three of their four goals — all scored at even strength — in the second period Saturday, with freshman forward Trevor Graznow starting the scoring by sneaking the puck past FGCU goalie Shaun Hatton unassisted, just 1:35 after the opening faceoff.

Less than two minutes later, senior forward Michael Niederer scored off assists from junior defenseman Maxx Mitchell and junior forward Timothy Doe for a 2-0 lead at the 16:29 mark before Doe finished feeds from Niederer and senior forward Blake Flanders off the ensuing faceoff, stretching the lead to 3-0 just 15 seconds later.

In Game 2, Flanders lifted Liberty to a 1-0 advantage by putting away a pass from Niederer with 9:13 remaining in the first period. Junior forward Justin Barstead put the Flames up 2-0 at 14:18 mark of the second period, set up by junior forward Josh Malin and sophomore forward Josh Wagner before Eagles left wing Dylan Cantwell ended Cyhaniuk's second shutout bid at the 13:00 mark by finishing feeds from Brandon Beard and Seth Cohen.

The Flames will play their second series of the season against NC State this weekend, with Friday night's opening game in Raleigh, N.C., and Saturday's rematch at the LaHaye Ice Center, both starting at 7 p.m. After losing two showdowns with the Ice Pack in the Southeast Regionals on March 3, 2019, and a regular-season showcase on Oct. 13, 2019, Liberty finally got payback with a home sweep in early November.

This weekend's series will be the last factored into the first 2020-21 ACHA Division II Top 20 national coaches poll on Jan. 31. That will be the first of five semi-weekly rankings this semester, with the top 16 teams in the final poll qualifying for the April 15-20 ACHA DII National Championships at a location to be determined.