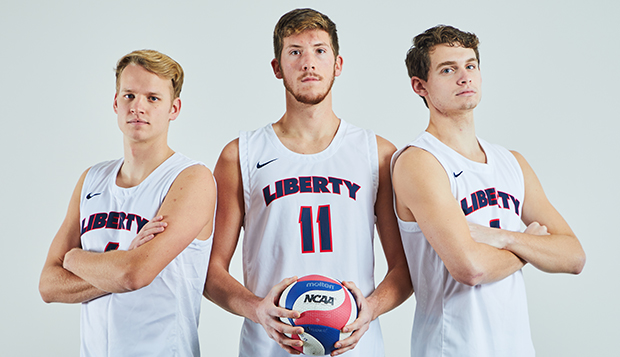 Though the Eastern Collegiate Volleyball Association (ECVA) has canceled league play for this season, Liberty University men's volleyball Head Coach Kaleb VanDePerre and his staff have networked opportunities for Liberty to play a revised schedule against non-conference opponents such as SVU, an NCAA Division III program.

The Flames will host Southern Virginia University (SVU) in two scrimmages between their Division I and Division II squads on Tuesday at 6 p.m. at the LaHaye Multipurpose Center, to set up official home-and-away matches against the Knights next month in Lynchburg and Buena Vista, Va.

"They're bringing two squads and each team will play best-of-three game matches," said VanDePerre, who resumed practice last week after an extended Christmas Break. "That will give us a chance to go over different lineups and simulate some game action before the season starts."

Liberty will host Carolina University, an NCCAA program formerly known as Piedmont International, on Feb. 12 at 6 p.m., and Lancaster Bible College on Feb. 13 at 2 p.m., before facing SVU in a best-of-five match on Feb. 17, at a time and location to be determined.

Liberty will travel to play Carolina in Winston-Salem, N.C., on March 5 and Milligan (Tenn.) College for a two-day, three-team round-robin event hosted by that NAIA program on March 14 and 15 that will serve as a final tune-up for the NCVF National Championships, tentatively set for April 1-3 in Minneapolis.

"It's awesome," VanDePerre said of having the opportunity to play matches in the spring semester and potentially challenge for a national title. "It helps kind of re-energize what we were doing last semester, when we were focused on just getting better, and there wasn't a light at the end of the tunnel. So it's good to have some benchmarks, and it will be much more fun to be able to play and for us to see some of these seniors be able to get back on the court and play and represent Liberty and their team for their final semester."

VanDePerre said the Flames will not have the same divided DI and DII teams as in previous seasons, but will feature a more fluid roster with one overall depth chart. He may experiment in matches by having one 12-man lineup available for the first game and another play in the second, and so on.

"The rosters are fairly set, but there is still competition from week to week," VanDePerre said, noting that he has had to shuffle his lineup this week with junior opposite hitter Cody Reinsma unavailable. "Cody is injured right now, so we're going to do a little experimenting with different offenses. Our key pieces back are (senior opposite hitter) Josh (Knapp) and (junior outside hitter) James (Morton) at the pins and Lucas Marine, who is back in the middle. He's a big spark for us, energy-wise."

VanDePerre is holding out hope of scheduling more matches against ECVA opponents who have been given clearance to play by their schools' administrations.

"We are waiting to hear from some of teams within the league," he said. "If any of our league schools get approval to play, the league will make it happen."

He is still working out a date for the Flames to face Appalachian State's club team, which has been approved to play, and a potential showdown with ECVA rival Virginia Tech in early March for a best-of-five game match in the new Liberty Arena.