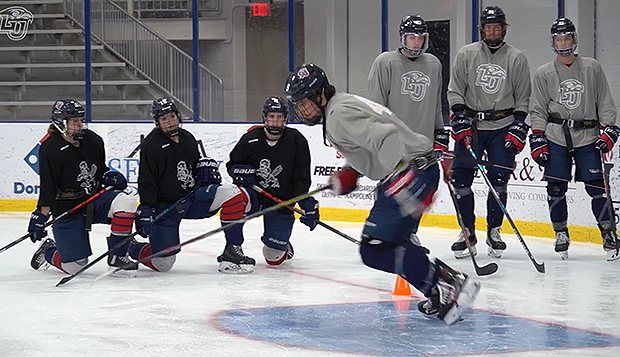 Flames DI men's hockey freshman forward Jason Foltz demonstrates the 1080 Sprint machine, using a belt with a cord attached to the device set up in the Zamboni tunnel at the LaHaye Ice Center.

Last semester, Liberty University's ACHA Division I men's and women's hockey teams began experimenting with the 1080 Sprint, described as the "Holy Grail" of performance-based technology, to give them a competitive edge, working in collaboration with 1080 Motion and Liberty's Department of Allied Health Professions.

"Liberty, specifically Club Sports, is incredibly fortunate and thankful to be working with the CEO of 1080 Motion, Peter Holmertz, as well as Dr. Jared Hornsby in this collaboration effort," said Flames DI men's hockey Assistant Coach Jonathan Chung, who also serves as head of Club Sports Academic Integration and Research. "The 1080 Sprint unit is a training device that is often seen being utilized at the professional, NHL, and NCAA DI levels, so we are incredibly grateful and ecstatic for the opportunity."

DI men's hockey Head Coach Kirk Handy, who also serves as the Club Sports Athletic Director, said the machine will be utilized by more than just hockey teams in the near future.

"It's going to go Club Sports-wide soon, because we're in the process of purchasing that machine now," he said.

Currently used by NHL teams and the top NCAA Division I programs, the system allows athletes to train in resistance, overspeed, and change of direction while simultaneously testing his or her performance.

"The 1080 Sprint allows athletes to become stronger and faster through resistance sprinting on land and skating on the ice, as well as overspeed sprinting and change of direction training," said Hornsby, an associate professor of exercise science at Liberty. "This type of training has been around, but now, we can quantify the data using the computer to which the machine is hooked up."

Club Sports Head of Strength & Conditioning Chris Kerr spent several hours online with Holmertz, learning how to run the 1080 Sprint and to utilize its interface. He purchased 12 top-of-the-line belts that can be hooked up to a harness with a cord tether system attached to the machine.

Kerr likes the versatility of the machine, which can be set up not only for workouts in the weight room or on a field or in a hallway, but also on the ice at the LaHaye Ice Center, set up behind the Zamboni doors.

"Top strength and conditioning coaches in my world talked about this machine and how it's improving their athletes' speed, their force output, their power production," he said. "It is perfect because right now we're only running 12 athletes at a time for workouts due to COVID restrictions. The athletes wear a belt and run away from the machine and as the line is pulled out, the super-computer within this unit is just crunching numbers every single step they take, every foot they move, every inch they move."

He said the machine is so precise that it can pull data from the micro level, every single inch along the track, to the macro — from the start line to the finish line.

Hornsby said the 1080 Sprint utilizes a quantum computer to calculate specific tension that an athlete runs or skates against in resistance sprinting, as well as the amount of pull he or she receives during overspeed sprinting. When used effectively, it can increase their explosive sprinting power, force generation, and sprint velocity.

"What is really unique about the 1080 is that it is one of the few ways that we can actually calculate resistance and overspeed," Hornsby said, noting that it is difficult to quantify those measurements using elastic bands and sleds. "Overspeed sprinting is a safe and effective way to have athletes skate faster than they normally would, to get comfortable skating at a faster speed, which eventually allows them to skate at a faster speed on their own. Programming sprint training on the 1080 Sprint machine will allow the athlete to maximize sprinting improvements while also being able to quantify recovery sessions as the athlete needs if they are drifting toward overtraining."

He said the machine can put an athlete through agility drills while gauging his or her ability to change direction quickly, another X factor that can result in huge gains on the field and ice.

"Change of direction is important because in all sports, you're either trying to get to a ball or a puck," Hornsby said. "You might be going one way and need to change 180 degrees."

Kerr said the machine was developed for track & field athletes but is equally effective in assessing hockey players' skating speed and power.

"In the sports performance world, speed is everything," Kerr said. "Everybody wants fast athletes. So, no matter the sport, whether it's hockey, basketball, or football, this machine can be adapted to the needs and demands of the sport to help increase the speed of the athletes.

"Hockey is a really acceleration-based sport, so I'm really hoping that this machine can help my hockey players skate faster from 0-10 yards — from blue line to blue line as you look out on the ice. If we're faster, we can get to more pucks and have more time and then hopefully get around (defensemen)."

As it becomes an integral part of the teams' training routines, the 1080 Sprint will allow the Flames and Lady Flames to train smarter and with injury prevention in mind.

"The 1080 Sprint unit will play an instrumental role in helping us achieve one of our goals, which is to develop faster, stronger, and more agile athletes," Chung said. "This machine will be vital toward the success of our team as it will provide tangible, quantifiable data that will help us coaches monitor and assess the progression of our players on a weekly basis."

Hornsby said, after utilizing the 1080 Sprint machine to assist the hockey teams with their normal training in season, some of his undergraduate and graduate exercise science students will have an opportunity to assist with data analytics at the season's end.

"For these students to eventually be able to be a part of this research is extremely rare due to costs involved," he said. "To be able to utilize the equipment used by professional sports organizations will be extremely important to separate from others in the job market."

In addition to the 1080 Sprint, the Liberty Hockey teams utilize wearable technology to measure athletes' sleep and recovery, as well as heart rate monitors to visualize how an athlete's body is responding to performance.

Chung is excited about the impact this new technology can have on the Club Sports teams.

"The data that the 1080 Sprint offers will also allow students an opportunity to conduct research studies that will not only aid in adding and contributing to the existing body of literature but also, aiding in improving our teams' overall success," he said.