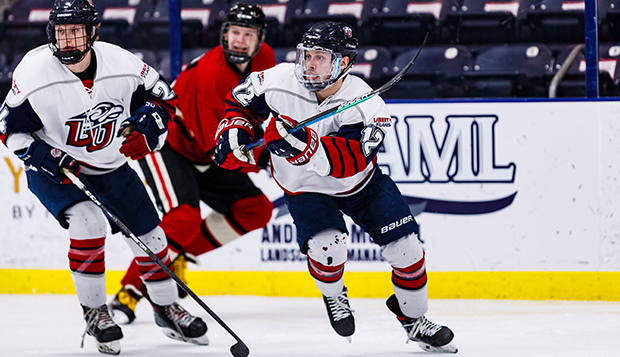 Liberty University's ACHA Division II men's hockey Head Coach Ben Hughes, like most coaches at all levels around the league, has had to redo his schedule nearly from scratch for the 2020-21 season due to COVID-19.

After getting off to a 2-2-1 start in the fall semester, including a Nov. 6 and 7 sweep of Southeast Region nemesis North Carolina State at the LaHaye Ice Center, the Flames have an 18-game schedule lined up for the spring. That will include five games against fellow Southeast Region power Florida Gulf Coast University (FGCU) and six showdowns with Midwest Region power Lindenwood (Mo.). Last season, the Flames and Eagles finished ranked No. 1 and No. 2, respectively, in the Southeast Region rankings.

Liberty is the lone team out of the Mid-Atlantic Collegiate Hockey Association (MACH) that is definitely competing on the ice this semester with the other seven (Delaware, Drexel, Maryland, Penn State, Rider, Rowan, and Stevenson) suspending operations due to COVID restrictions.

"We're the only one playing now, and there are a lot of unknowns still," said Hughes, whose team is back on campus and started practicing Wednesday. "There is still no official word what things are going to look like. We're not closing the door quite yet on having a (MACH) playoff."

He said the ACHA will release an official announcement on the status of the ACHA DII regional and national tournaments at the end of January.

FGCU will host Liberty in its spring-opening series Jan. 22-23 before the Flames face the Ice Pack in a rematch, Jan. 29 in Raleigh, N.C., and Jan. 30 at home. Liberty will entertain East Texas Baptist on Feb. 6-7 before traveling to Indiana to play two games at Trine University (Feb. 12-13) and Michigan to face Adrian College on Feb. 14.

The Flames will host Lindenwood Feb. 19-21 before traveling to St. Charles, Mo., to play the Lions three times March 5-6 and concluding their regular season with three home dates against FGCU on March 12-14.