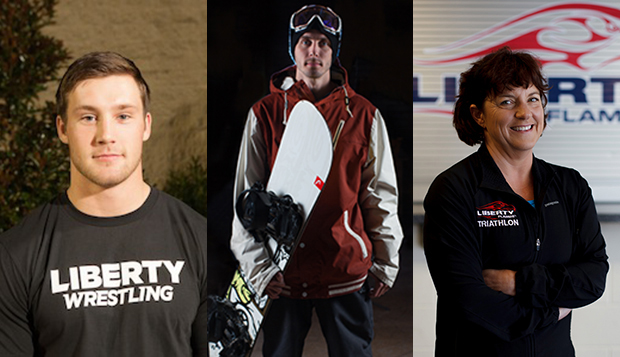 Aaron Thompson, Will Scheren, and Beth Frackleton will be inducted into the Club Sports Hall of Fame on April 10.

Liberty University's 2020 Club Sports Hall of Fame class was finalized this week, to be inducted in the spring semester — rather than in December — for the first time in the seven years the program has honored its former athletes, coaches, and administrators this way.

The class includes Aaron Thompson, Liberty's second NCWA Grand National wrestling individual champion in 2012; former ski and snowboard Head Coach Will Scheren, who led Liberty to the United States Collegiate Ski & Snowboard National Championships in its second and third seasons as a program in 2012-13; and Beth Frackleton, the founding men's and women's triathlon coach who helped establish that program as a national contender from 2010-14.

The Hall of Fame Committee is planning to host an induction ceremony April 10 at noon at the Craddock Terry Hotel in downtown Lynchburg, Va.

Thompson won the 2012 NCWA 197-pound title in Daytona Beach, Fla. — on the same day but seven matches after Club Sports Hall of Fame inductee Scott Clymer captured the 133-pound crown to become Liberty's first NCWA individual champion. He started his career as an NCAA Division I athlete before becoming a three-year team captain and three-time NCWA All-American for the Flames, also placing fourth as a sophomore and second as a senior. Academically, Thompson earned his B.S. in Sport Management in 2012 and M.S. in Athletic Administration in 2014, while working as an associate for the Flames Club.

Scheren, who received his undergraduate degree through the School of Business in 2008 and Master's in Business Administration in 2012, helped open the Liberty Mountain Snowflex Centre in 2009. He led the Flames snowboarding team to a fourth-place USCSA national finish in 2013, his last season at the helm.

Scheren returned to Liberty in 2016, when he was hired by Senior Vice President for Spiritual Development David Nasser to join his twin brother, Kyle ('09), on the Office of Spiritual Development (OSD) staff. He is also part owner at the company, OrcaVue, makers of the first 360-degree video booth platform that sets up at major events across the United States and around the world.

Frackleton is a USA Triathlon Level 1-certified coach who now works as a chronic care coach at the University of Virginia, and still trains and competes in the sport herself. She traveled with two of her top recruits — Flames team members Parker Spencer, her eventual successor, and Joseph Anderson — to Auckland, New Zealand, to compete in the World Age Group Triathlon Championships in October 2012.

As a coach, she guided the Flames to a 19th-place finish out of close to 120 college and universities represented at the 2012 USA Triathlon Collegiate National Championships before placing 29th out of 121 teams in 2013 in Tempe, Ariz.