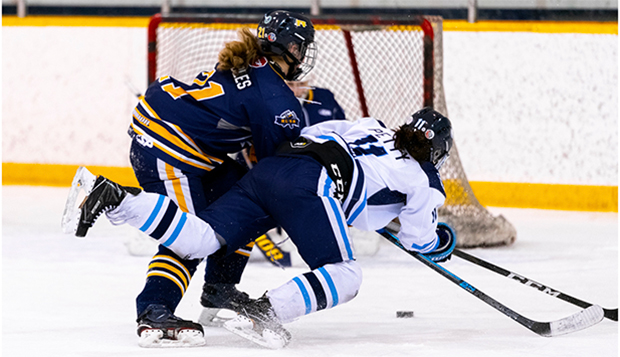 "Coach Lowes was outstanding during the recruiting process," Peebles said. "During each phone call we had, he always made it clear that he deeply cares about his players, and the team cares about each other and are a very tight-knit group, which is something that is very important to me."

Peebles is the Lady Flames' fourth recruit, and second incoming defenseman, for Fall 2021.

"We are very excited to be adding Samantha to our team next season," Lowes said. "She is a talented athlete, good student, and great kid off the ice. I believe she will excel in all areas as a student-athlete here at Liberty."

"Sammy makes us better as a team, and is the kind of player we need in games against the top teams in the ACHA," he added. "I am confident she will fit in on campus and be a great fit on our team."

Peebles, who is in her third season playing in the British Columbia Midget AAA league with the Fraser Valley Rush, describes herself as a formidable two-way defenseman who makes smart decisions with the puck.

"I have a strong physical presence on the ice as well as a very hard slap shot from the blue line," she said.

Those are two of the qualities that stood out most to Lowes in his assessment of Peebles' talent level and impact potential.

"The first thing we noticed about Sammy is that she is a big, strong, and athletic defenseman, which will make the transition to the collegiate level — where she will be playing against older and stronger players — easier," Lowes said. "As we watched more, we saw her poise with the puck and an ability to make good plays both passing and skating with the puck. Sammy also has a nice presence in the offensive zone and will be a scoring threat."

Competing in the same league that produced Liberty sophomore forward Yannick Truter, a Fall 2019 recruit, Peebles has won five British Columbia Provincial medals during her youth career — one gold, two silver, and two bronze. Meanwhile, the projected nursing major who plans to specialize in maternity or pediatric care, has also excelled in the classroom, maintaining a 90-plus percentage average over her high school career.

"I am an extremely determined student-athlete, both on and off the ice," Peebles said. "Academically, I have always put in my best effort. As an athlete, I have always pushed myself to become the best that I can be, both in the gym and on the ice."

She said she plays with fire and passion on the ice, thinking of her teammates first and sacrificing herself when necessary.

"During games I play with grit and battle with tenacity," Peebles said. "I have always stood up and defended myself, but more importantly, I stand up for and protect my teammates whenever it is needed."

She said although she hasn't had the opportunity to visit Liberty's campus due to COVID-19 travel restrictions, she has a pretty clear picture of what her college experience will look like.

"The way coach Lowes would always describe the school, the team, and the community made it seem like the perfect school for me and a place I would thrive at," Peebles said. "The core values that Liberty teaches and follows are what I strive to do every day."

Peebles, who enjoys riding ATVs and joining her family on its annual summer camping trip to its cabin, is looking forward to spreading her wings and expanding her horizons over the next four years at Liberty.

"I am excited to have to opportunity to continue to play the sport I love while getting a strong university education," Peebles said. "This will also be the first time I am away from home so I am excited for the experiences I will have and how I will grow as an individual and as an athlete."