Equestrian riders make strides to saddle up for spring season 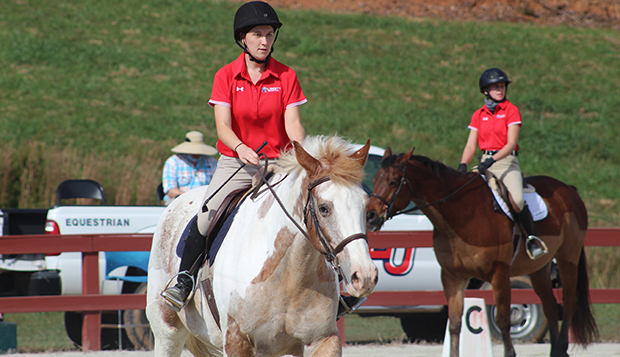 Life at the Liberty University Equestrian Center didn't exactly get back to normal this semester, in the midst of the pandemic, but with protocols in place the Lady Flames were able to do some riding, including hosting a scrimmage against St. Andrews University on Oct. 24.

"We weren't really sure what everything was going to look like this fall," Liberty Director of Equestrian Programs and Hunt Seat Head Coach Suzanne Flaig said. "Everything was a little tentative. We did have a schedule that ended up being canceled for the most part, so we implemented some kind of creative solutions for that, working with the guidelines that we all have to follow."

"We were able to implement some creative strategies just to be able to give the girls something to look forward to and to participate in," Western Assistant Coach Madeline Shrode added.

Both the Lady Flames' Hunt Seat and Western teams made the most of the opportunity to showcase their talents in a competitive setting, using both the Equestrian Center's indoor arena and outdoor riding ring.

"It was fantastic just to be able to have them get out and hopefully shake off a little bit of the rust that we had accrued in the offseason," Shrode said.

"They looked great," Flaig added. "We weren't sure what to expect. The biggest thing is when you don't do it for a little while, there's always a little bit of nerves that come into it. It was such a great opportunity, even though they were scrimmages, for them to kind of get back into their element and work through some of those nerves to really be able to further their riding skills."

Both coaches were blessed to have a few new riders join the ranks this semester.

"The nicest surprise was that we had some new freshmen here on campus who weren't necessarily on our radar that came out to our tryouts and have really been a nice complement to our returners," Flaig said.

"We also had a few new faces come to join us this year, so we are very excited about what the future holds and hopefully what the spring holds for them," Shrode added.

"We will have a quick start," Flaig said. "We are already planning for having a pretty rigorous program once we are able to get back in action in January. With school starting a little bit later, it does not leave us a lot of time to prepare, so we have tried to do as much this fall to remain active."