Taekwondo team settles into new space, gears up for future 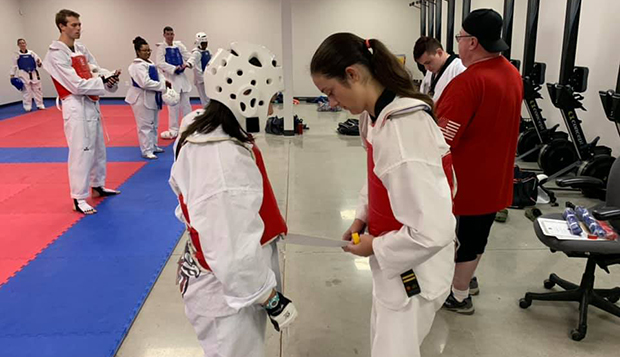 Several members of Liberty's taekwondo team tested for higher level belts in early November out of their new practice space at the Club Sports Training Complex.

Taekwondo, like wrestling, is a very difficult sport in which to practice social distancing, as Liberty University taekwondo Head Coach Tom Childress can attest to.

"Particularly in a contact sport where you're out there, you're in person, sweat flying, so trying to get that back together and do that in this current climate worrying about COVID, we obviously don't want anybody getting sick," Head Coach Tom Childress said.

The Flames and Lady Flames have dealt with the cancelation of their National Collegiate Association of Taekwondo (NCAT) Championships last spring and not having any scheduled competitions this fall by choosing to focus on what they can do and not dwell on matters out of their control.

"It's been great to come back and see everybody again," sophomore Phillip Muddiman said. "We definitely push each other, so developing new strengths and teaching each other has been great."

"The team is definitely different this semester, with this new dynamic to be in the team but not to interact like we usually do," senior Ren Western said. "We keep six feet apart, we limit the sparring to keep that distance and we try to keep our exercises as far away from each as possible while still being a team. It's great to see everybody helping each other out while still trying to keep distance and maintain safety, a good atmosphere."

She said the athletes have made the best of the situation, showcasing their optimism and perseverance in the midst of the pandemic.

"The team has definitely kept the spirits up this semester," Western said. "It's pretty inspiring to see the rest of the team motivate each other while not being motivated for competitions."

A positive reward for the team's patience and adaptability has been the opportunity to move into a facility of their own in the new Club Sports Training Complex.

"It's a nice new facility," Childress said. "We have our own space for the first time ever and they really love that that they have their own building to come to, their own access to it. They can come in and work out at different hours when people need to."

Typically the crew team uses the space for early-morning indoor erg workouts before the taekwondo team holds practices in the evening, after classes.

"I love that we've got our own corner of taekwondo here," Western said. "We can come into an actual Club Sports annex. We're not practicing in some random gym, putting some mats down. We have our own taekwondo room to be able to practice and spar with each other and make each other better. It's kind of motivating to be able to see our sport have an actual sign in an actual building."

Muddiman said the new room has helped the team to fix its collective gaze on a brighter future.

"Hopefully, next semester we do have a season," he said. "This semester's been tough without having competitions, but we've been able to really build off each other this semester, motivating each other, seeing these new teammates with their new strengths and weaknesses. Everybody brings something different to the table, so it's been great. Whatever next semester has to bring, we'll be ready for it. We've been training a lot so we will stay ready and … keep motivating each other."

Childress is constantly challenging team members to seize the day and make the most of their workouts, glorifying God in the process and trusting Him for the outcome as they train to become Champions for Christ.

"Although we are a sports team and our idea is to go out and compete, that's not our end all, be all," Childress said. "It's what we do to get there. Champions aren't made when you enter the ring and win a championship. You win that championship through months and years of preparation beforehand. Even if we don't get to do anything next semester because of all of the stuff that we have going on, there's always the fall and then the spring of the next year, and that's what we're preparing for.

"We're preparing for the future, and the guys and girls have really done a great job of adapting and adopting that motto that they're laying the groundwork and the foundation for what we might get to do in the future, and that's all we can really do right now," he added.