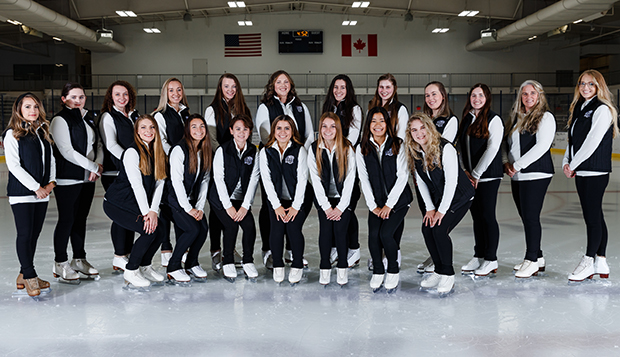 Liberty University's figure skating team had a terrific turnout for its mock competition/tryouts on Oct. 18 at the LaHaye Ice Center, allowing coaches to watch 22 different starts to see how well skaters were able to perform under the pressure of a competitive atmosphere.

"Numerous spectators stopped by to cheer for their friends and family, which made it feel like a real competition," Lady Flames Head Coach Dawn Harter said.

The event started with senior Emily Wilson skating with poise and control to the Killian Pre-Gold Solo Dance pattern, one of her strongest dance starts. She also skated her Senior FreeDance, securing a competitive start at that level for the team.

"Angela has also prepared a Senior Free Dance as well as a Novice short and Junior freeskate," Harter said, noting that she is currently battling some breathing issues, but is hopeful to be able to skate at her maximum capacity for her senior season. "When we have Angela at 100 percent, she can knock her competition out of the park."

Sophomore Olivia Ford will be skating not only as an accomplished Pre-Silver solo dancer this season, but hopes to perform her Junior freeskate routine after injuries limited her to a single team maneuver competition last season.

Sophomore co-captain Marissa Harter has prepared a Juvenile Free Dance as well as her Preliminary Solo Pattern dances and a Preliminary Freeskate while sophomore Sarah Hicks has stepped up her game and is vying for a Pre-Juvenile start this season.

"She has been working extremely hard on perfecting her program since last summer," said Dawn Harter, who is also pleased to have senior Hannah Pulley and sophomore Alecia Bernau back on the team this season. "They skated for the synchro team last year but this year they have found the time, energy, and confidence to skate for both teams. They both have a strong work ethic that team members appreciate."

"They are all extremely talented," Dawn Harter said. "They just need to have the right mix of physical endurance and time management to make it all work."

In the spring competitive season, the Lady Flames are looking forward to hosting the LU Classic, the first Eastern Sectional event on Feb. 13-14, before traveling to Penn State on March 6-7 and Princeton on March 20-21 as final qualifiers for the April 16-18 USA Figure Skating Collegiate National Championships at Adrian, Mich.