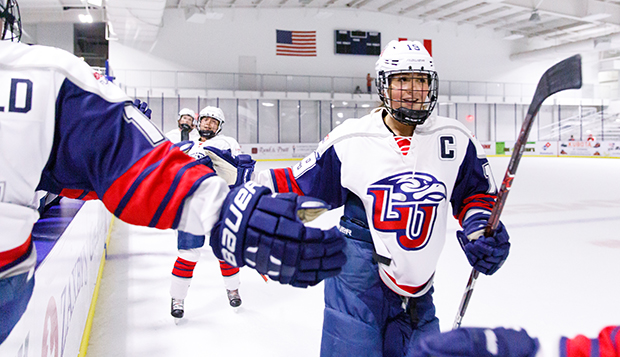 Liberty University's ACHA Division I women's hockey team concluded fall semester action by getting hat tricks from three forwards en route to a 14-1 triumph in Sunday's rematch with the Washington Pride U19 travel team at the LaHaye Ice Center.

The Lady Flames (4-0) netted three goals in the first five minutes of play, matching their total from Saturday's series-opening victory over the Pride (5-9-3).

Graduate forward Deena Birney set up freshman forward Brityn Fussy's third goal of the season just 37 seconds after the opening faceoff. Birney chased down the puck behind the Pride's cage before sending a crossing feed to Fussy as she cut through the right crease and fired a shot past goalie Natalie Storm for an early 1-0 lead.

At the 16:01 mark, sophomore defenseman Aislyn Stretch sent a pass from the high slot into freshman forward Carlie Foxhoven for a backhanded finish in the left crease, sliding the puck under Storm's pads for a 2-0 edge.

With the Lady Flames cycling around the Pride's cage moments later, senior forward and head captain Shannon Fehr received a cross-ice pass from Birney and lifted a wrist shot from deep in the left circle past Storm into the top-left corner of the net, extending the advantage to 3-0 with 15:20 left in the first period.

Fussy pushed Liberty's lead to 4-0 at the 6:36 mark after taking an outlet pass from freshman defenseman Priscilla Ziefle on the tape of her stick and accelerating around the left circle before slicing back across the front of the cage and beating Pride goalie Katherine Donovan inside the right post.

Less than two minutes later, Fussy set up Fehr for a two-on-one fast-break finish in the right crease, lifting her wrist shot just under the crossbar to make it 5-0.

Liberty added two more scores in the final 2:21 of the first period with Birney cleaning up the rebound of her own shot off an assist from senior forward Danica Polson before graduate forward Vanessa DeMerchant received a pass out of the left corner from junior forward Alexis Lauber as she skated across the slot and chipped her shot over the glove of Donovan to stretch it to 7-0 at the 1:27 mark.

Washington forward Lexi Sung ended the shutout bid for Lady Flames freshman goalie Kylie Mebs by following her own shot on a fast break that Mebs was unable to glove, trimming the deficit to 7-1 with 10:26 left in the second period.

But the Lady Flames responded with two goals in rapid succession in the next two and a half minutes. Sophomore defenseman Julia McDonald sent an assist from the left corner to Fussy and Fehr followed Fussy's blocked shot with a point-blank, top-shelf putback in the left crease to complete her hat trick with 8:47 to go. Then, sophomore forward Yannick Truter put away the rebound of a shot by Birney after crashing into the left crease for a 9-1 Liberty advantage at the 8:12 mark.

Finally in the third, with the Lady Flames on the power play, a quick sequence of passes resulted in their 10th goal of the contest with Truter setting up graduate defenseman Dana McLeod in the high slot before she sent an entry pass to Polson in the right circle, where she fed senior forward Shelby Bradford for a finish in the left crease with 19:14 remaining.

DeMerchant maneuvered the puck around a Pride defenseman behind the cage before emerging in the right crease and lifting a wrist shot off the left post and the back of Donovan for an 11-1 lead at the 11:55 mark. Bradford then skated the puck along the right endline and slipped a backhander past Donovan that DeMerchant put away to finish her hat trick at the 6:21 mark. The Lady Flames capitalized on their third power-play goal with 1:07 remaining with graduate defenseman Sally Hoerr tapping in a loose puck from near the right post after a scrum in front of the cage before Fussy capped the scoring, and her hat trick, by finishing a fast break in the right crease with nine seconds to play for the 14-1 final.

The Lady Flames are scheduled to resume play with a series against Lindenwood on Jan. 22-23 at the LaHaye Ice Center.