Lady Flames shut out Washington Pride U19 team in opener 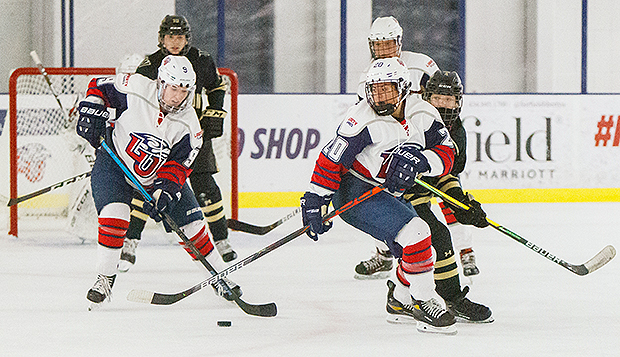 Liberty University's ACHA Division I women's hockey team improved to 3-0 against the Washington Pride U19 travel team this fall with a 3-0 triumph, Saturday night at the LaHaye Ice Center.

"We weren't as dominant as we were the last time we played them and they gave us a tougher matchup tonight," Lady Flames Head Coach Chris Lowes said, referring to a 7-0, 10-2 sweep of the Pride on Oct. 10-11 at home.

Liberty needed less than five minutes to net the opening score in the first period when senior forward Shelby Bradford skated the puck behind the cage and dropped it back to graduate forward Deena Birney. She skated left to right behind the net herself before threading a pass through the right crease to freshman forward Linzy Jedrzejek for a one-timed, top-shelf finish from out in front.

With 47 seconds remaining in the first, freshman defenseman Priscilla Ziefle launched a shot from the left point that bounced around in front of the goal — from junior forward Danica Polson to Birney before senior forward and head captain Shannon Fehr finally slid the puck under the pads of Pride goalie Katherine Donovan from in the left crease for a 2-0 Lady Flames advantage.

After a scoreless second period, the Lady Flames killed a penalty at the start of the third period before Fehr netted her second goal at the 17:41 mark, skating with speed around the left circle before cutting back across the crease and lifting a wrist shot into the top-right corner of the cage to extend Liberty's edge to 3-0.

"We needed her tonight," Lowes said of Fehr. "We had some chances we missed, and there are going to be nights where Polson or Bradford are quiet."

The Lady Flames were playing without graduate forwards Val Manchak, who is recovering from surgery and won't be back until next semester, and Alex Smibert as well as freshman forward Rianna Spanier.

Liberty outshot Washington, 40-19, for the contest and freshman Amanda Storey made 19 saves to earn her first shutout in goal for the Lady Flames (3-0).

"They had a few chances off of a few breakdowns and she held strong," Lowes said.

Liberty finished 0-for-5 on the power play, and Lowes said the offensive execution looked sloppy at times.

"That's got to get better," Lowes said of capitalizing on the man advantage. "There's things that, for mid-November, I am disappointed with where we're at, but then this is only our third game. We have the expectation as a team to get better every time out. We had our moments tonight, but there's still a lot we want to accomplish."

The Lady Flames will host the Pride (5-8-3) again at 11:45 a.m. Sunday, streamed live by LFSN. Freshman Kylie Mebs will get the start in net, as she did in a season-opening shutout.