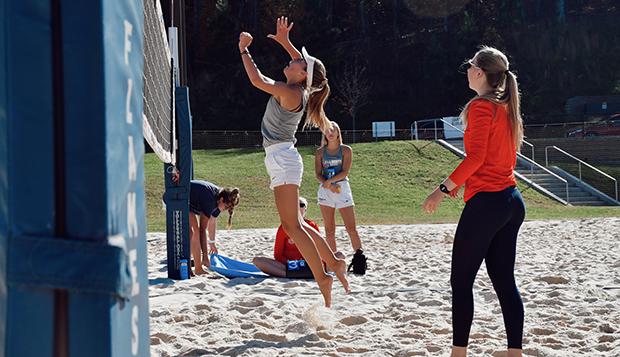 In their final tournaments of the fall semester, Liberty University's men's and women's beach volleyball teams hosted several tandems from the University of North Carolina on Saturday, with the Flames playing an open tournament and the Lady Flames a dual scrimmage.

Liberty's top men's duo of James Morton and Tommy Speelman were deemed overall champions out of 12 teams entered after defeating fellow Flames juniors Tait Lapham and Ben Dowd, 21-17, in the final, played on the beach courts beside the East Campus Field House.

"Overall, the guys showed they are still the top in the area in the sand," Liberty Head Coach Kaleb VanDePerre said. "James and Tommy didn't drop a game all day and Ben's and Tait's only loss came in the final."

He said those members of the Flames' indoor team who devoted their offseasons to sharpening their skills in the sand were able to distinguish themselves from the rest of the crowd.

"Our players who stayed and trained over summer were incredibly sharp and were able to get by pretty easily until the power pool where they faced off against the other top teams," he said. "Our young guys did really well battling some tough three-set matches. It was really good for them to play in a tournament format and matches to gain experience for when the bigger events come back."

In the friendly women's matchup with the Tar Heels, waged on the Liberty Mountain Intramural Complex courts, the Lady Flames won six matches and lost nine in a tournament that included two rounds of pool play.

"Overall, my response from the day was ‘encouraged,'" Liberty Assistant Coach Jess Nelson said. "We have such a young team and were able to get some big wins against a bigger program. Obviously, there's a lot of room for improvement, and we will continue working on mindset (strategies) and solidifying partnerships for the spring."

The Lady Flames competed with six tandems, to four for UNC, with North Carolina State also entering one. Liberty's top pair of freshman Lizzy Armstrong and sophomore Kaitlyn Holbrook, a transfer from Coastal Carolina, went undefeated before falling to the Tar Heels' top team in a scrappy final.

VanDePerre said that UNC tandem is made up of seniors entering the season as the top-ranked women's pair in the National Collegiate Sand Volleyball Association (NCSVA) Southeast Region.

"All of our top three pairs played really well on the day," he said. "Seeing our freshman compete already was really promising. We need to keep getting more aggressive from the service line and in transition but our effort and control were pretty solid all day."

Liberty's No. 2 team of freshmen Riley Smith and Cara Lecklider and No. 3 pair of graduate Alyssa Register and freshman Sydnie Metzker held their own against the competition, with Register and Metzker winning a three-game match against UNC's No. 3 duo.

Armstrong and Holbrook swept the Wolfpack tandem, as did Register and Metzker, with NC State defeating Liberty's fourth-seeded duo.

Nelson was pleasantly surprised by the play of sophomore Genessa Sirard and freshman Heather Forton.

"They partnered up and had a couple exciting matches," she said noting that they lost the first set of their final match decisively before rallying to win the next two, 26-24, 15-13, to prevail in three. "They made adjustments that really paid off."

Nelson said though the Lady Flames lost more matches than they won on the day, they made progress that she hopes to see continue through the spring.

"It was great to see some of them play their first collegiate matches ever, and to see them making adjustments throughout the day to let them win was really exciting," said Nelson, who is proud of the way her players have made the most of a trying season in dealing with restrictions in the midst of a pandemic. "All fall, we mostly have been playing at our own courts against each other, and sometimes, it is hard in that type of practice environment to stay focused on the goals you have. Not playing competitive matches can lower your competitive edge. What has been really encouraging has been seeing the players' positive attitudes, and their flexibility.

"We'll see how the spring goes, but I am really excited about the progress our girls will make," she added. "We have an extremely flexible and well-rounded group on the roster. I think we have a really great spring to look forward to, with a lot of hopeful things in the makings. We are definitely trying to get the girls more opportunities to travel and see more opponents and play in a variety of environments." 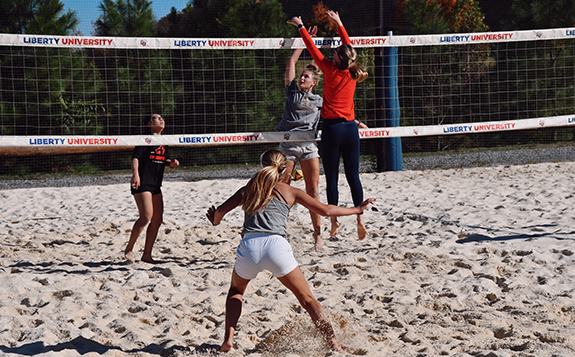 Armstrong goes up for a block attempt at the net while Holbrook covers the back court.