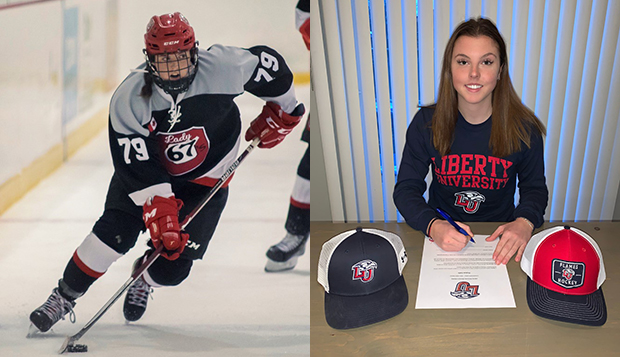 Peyton Carle, who plays for the Ottawa Lady 67's as well as her high school team, signed to play collegiately at Liberty.

Versatility and all-around athleticism are two of the strengths that Liberty University ACHA Division I women's hockey Fall 2021 recruit Peyton Carle, a defenseman from Ottawa, Ontario, will bring to the Lady Flames' lineup over the next four seasons.

Besides playing hockey for St. Mother Teresa High School and the Ottawa Lady 67's in recent winters, Carle has competed in no fewer than four other sports for the Titans — field hockey, track & field, volleyball, and touch football — in addition to winning the 2018 and 2019 junior championship tournaments at her home golf course.

"We are very excited to have Peyton join our team next season," Lady Flames Head Coach Chris Lowes said. "Peyton is a great athlete, but more than that she fits the culture we are committed to at Liberty. Everyone we talked to spoke about what a good teammate she is and about her leadership potential.  I believe Peyton will have great success in her time here at Liberty as she continues to grow as a student, athlete, and person."

As gifted as she is in multiple sports, hockey is her first love and arguably best.

"I am passionate and determined both on and off the ice," said Carle, an honor roll student and Level 2-certified Hockey Canada referee. "I will bring a positive attitude and strong work ethic to this team – in the gym, on the ice and in the classroom."

She considers herself a tough defensive player who can also make an impact on the offensive end.

"I have a high hockey IQ and my best assets are my skating and my first pass," Carle said. "I have a powerful shot from the blue-line and I am strong when quarterbacking the power play."

"Peyton is a strong two-way defenseman," Lowes added. "She is a very good skater with size, who will be able to defend against top players in the league.  I also like her confidence with the puck on her stick, not just making a good first pass, but having the skill and confidence to lead rushes and provide some offense – either on the rush or off the cycle."

Carle said playing university hockey has always been her goal. She made her decision to continue her career at Liberty after speaking with Lowes, researching Liberty's academic programs, and getting a sense of the hockey culture and spiritual climate on campus.

"I had visited schools and spoke to coaches over the past couple years and I never had that moment of knowing, ‘This is the right place for me' until Liberty," said Carle, who plans to study criminal justice with an emphasis in forensics and to apply to law school after graduation. "I knew that this is where I am meant to be and where I want to be."

She is looking forward to launching her collegiate career at Liberty and contributing to the reigning ACHA DI national championship team's continued success.

"I will be away from home for the first time, but I feel as if Liberty will be the perfect home away from home," she said. "I am excited to work hard to be the best player and person I can be and I want to mature through this process – to not fear my faith at Liberty, but to grow in it."

Lowes said Carle is a valuable addition to the incoming 2021 class of recruits to the program.

"This is an important year for us recruiting, as we are going to be graduating some key pieces from our championship runs," he said. "Adding Carle to our blueline is very exciting.  I believe she will come in and play a big role from the start."