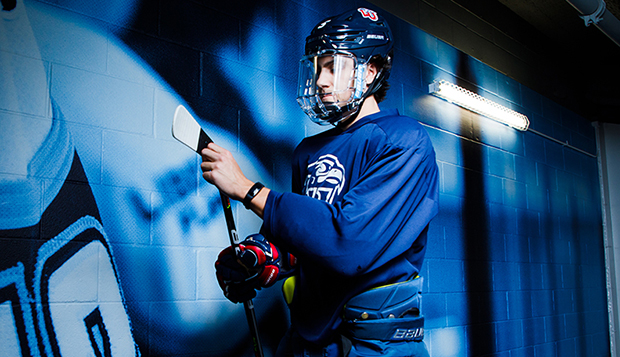 Members of Liberty University's ACHA Division I men's hockey team are getting season-long experience with wearable sleep technology supplied by Fatigue Science, with the data to be analyzed in future research conducted by staff and students from the School of Health Sciences.

The Club Sports team's student-athletes are using ReadiBands to assess the quality and quantity of their sleep on a nightly basis. The device was developed by the United States Military, which invested roughly $28 million into determining an algorithm that helps researchers understand the effects of quality and quantity sleep.

Since being issued their ReadiBands on Sept. 23, the players' results have been monitored regularly by Dr. Jared Hornsby, professor of Health Sciences in Liberty's Department of Allied Health Professions, and the Club Sports Strength and Conditioning staff.

"Most (student-athletes) don't get eight hours of sleep," Hornsby said. "Between studying, class, practice, and having a life, most people only get about four to six hours. Americans say, ‘I can just push through it,' but what we are starting to see in those people who only get three or four hours of sleep each night — either intentionally or unintentionally — is that it can cause a lot of health consequences."

Research has shown a clear correlation between adequate sleep and athletic performance, including speed, strength, and muscular power, as well as cognitive function.

"While you can gut it out with little sleep on the short term … if you stack weeks and months with little sleep, that can start to take a toll on you," Hornsby said. "Hopefully, this band will help (student-athletes) to see, ‘Hey, I'm not sleeping enough, and that's impacting my performance.'"

Hornsby, who earned a Ph.D. in Human Performance from the University of Alabama before starting his career at Liberty in 2014, has conducted extensive research in the areas of physical strain and recovery among military, law enforcement, and athlete populations.

"Basically, we are looking to minimize the stress student-athletes experience while they're in school, in practice, and in their daily lives, and to maximize recovery," he said. "That sleep monitor helps us understand how recovered they are for the day to come."

Head of Club Sports Academic Integration and Research Jonathan Chung is facilitating the collaboration between Hornsby and Club Sports Head of Strength and Conditioning Chris Kerr. Taylor Zimmer, one of Hornsby's exercise science graduate students who also serves as the DI men's and women's hockey teams' heart-rate analyst, is assisting in monitoring and analyzing the data.

The battery-powered wristband, connected to a sleep data-receiving cloud, gives continuous scores ranging from 0-100 based on the amount of rest the student-athlete has had.

"The data that we are able to obtain from the ReadiBand devices has been extremely eye-opening for us … and exciting with regards to future research opportunities," said Chung, who also serves as an assistant on the Flames' DI coaching staff. "Having access to the wide range of data points such as quantity and quality of sleep per night will be advantageous to us as coaches and beneficial for the players. If we can improve their sleep, it will hopefully improve not only their athletic performance, but also their overall quality of life."

Kerr said Hornsby was instrumental in securing the device as well as other state-of-the-art machines and instruments that Liberty's student-athletes use on a regular basis.

"He genuinely wants to change the lives of students," he said. "Why do we have these ReadiBands? It's just an education tool to help us win a national championship this year. A team is only as good as the hockey players on it, and sleep is a huge part of it."

In 2017, Hornsby and several of his graduate and undergraduate students conducted research for the Liberty University Police Department (LUPD) to determine the impact of officers' sleep on their shooting precision at LUPD's gun range. This project was funded by Liberty's Provost Research Initiative and made possible by then-Provost Dr. Ron Hawkins and Dr. Darren Wu, associate director of Liberty's Center for Research & Scholarship.

"Basically, we found out that the police officers were only getting four to five hours of sleep, so that really impacted their marksmanship," Hornsby said, noting that the device has also been used on bus drivers and train conductors across the country.

He said ReadiBand scores of 70 and below indicate some level of impairment in a test subject's ability to perform any activity.

He said it is essential for student-athletes to have good sleep hygiene that includes a dark, quiet, cool sleep space, banking sleep with naps before or after a time of sleep deprivation, and unplugging from phones and laptops well before bedtime.

"Blue light does affect the hormones in your body," Hornsby said. "It's going to blunt that feeling that we normally get as we're getting drowsy and going to sleep and it will ramp us back up."

The ReadiBand does not analyze brain function or blood oxygen levels or identify disorders such as sleep apnea or insomnia.

"It's really more about behavior modification than it is trying to solve a medical or physiological problem," Hornsby said, noting that it can help discover those issues, often triggered by emotional stress. "The ReadiBand is just a signpost for us to try to get them to the right people to help them."

Kerr said analyzing players' sleep data with in-game performance is very difficult to judge. Where both he and the players see the strongest correlation is in the relationship between poor sleep and its impact on their vertical jumps, standard measurements that provide valid data.

Utilizing the ReadiBand units and the data provided allows Kerr to see the ebbs and flows throughout the semester and opens up opportunities for him to educate the athlete.

"If we start to see people who are really, really fatigued on a consistent basis," Hornsby said, "then we can start thinking about interventions that we can do to help get them back on the right track."

Kerr has benefited from using his own ReadiBand device over the past several months.

"Even for me, I am pretty dialed in with nutrition, diet, training, etc., and having this tool has helped me to be a better husband, a better employee working (athletes) out, and hopefully a better coach," he said.

He said when certain patterns develop throughout the team, the data will help coaches know when to tone down practices after a particularly challenging road series, such as this week's showdown at top-ranked Adrian (Mich.) College, to avoid overstressing players.

"They can say, ‘Hey, we actually may need a recovery day or do our regular workout but do it a little shorter or a little lighter," Hornsby said. "If you're stacking hard workout after hard workout and there's no recovery, at some point something's going to break, whether it's injury (or) mental fatigue. If they're not motivated to work out, they're probably overtrained."