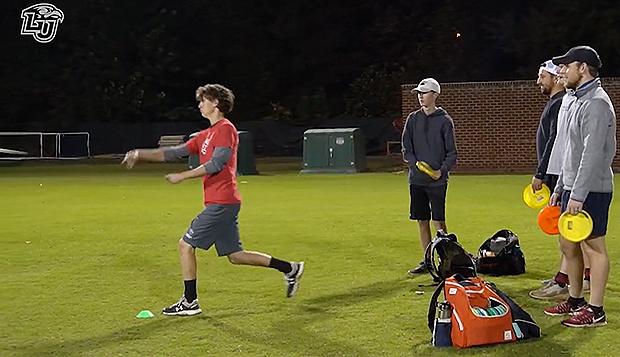 Players refine their throws on the men's and women's soccer practice fields beside the new indoor tennis facility.

COVID-19 has had both negative and positive effects on Liberty University's disc golf program this year. While it canceled the National Collegiate Disc Golf (NCDG) National Championships last spring and postponed this month's annual Flamethrower Invitational National Qualifier to next semester, the pandemic produced a major increase in players on a national and global scale over the summer.

"We have an amazingly large team this year," Flames Head Coach Steve Bowman said. "Because of COVID, everybody decided to go play disc golf last spring and got better and better and played more and more … (and) we had our largest turnout for tryouts ever."

"It's been great seeing a lot of new players out on the course and out at practice," Flames junior Spencer Ellingson said. "We've got a lot of great personalities, a lot of really good players that are coming together and I think we're really starting to bond as a team."

Out of necessity, Bowman has enlisted his veteran players to help teach and train the multitude of newcomers, to be able to keep more student-athletes and develop them into the players they can become.

"It's nice to see the (older) guys kind of jump in and help teach the new guys," he said. "As a coach, that's powerful to see guys motivated and encouraged to be wanting to play and get better and build each other up. Any time you are able to teach something, you learn as well and it betters your skill level in that process."

"There are a lot of new people who are still working to get their throws down, but it's really cool that we have all of the veterans to help them instead of just the coach," Hayes added.

With limited tournaments on the fall schedule, the incoming freshmen and returning players have progressed rapidly through consistent practice sessions.

"After not being able to go to nationals last year, it has been really nice practicing again (because) we didn't know what was going to happen with COVID," Lady Flames senior Olivia Hayes said. "It gives us a great opportunity to work on those skills that a lot of us have worked on over quarantine … or to fix anything that we may have lost over the break. So this is just a great time to perfect those things that we need to perfect."

Ellingson looks forward to seeing the fruit of the Flames' fall workouts in the spring semester.

"We've got a strong group of returners coming back who really used quarantine in the offseason to work on our games," he said. "We've got a lot of new guys coming in, lots of talent. I'm really excited to see where we go this season and when competitions start in the spring, to see how we come together as a team to compete."

After a third-place championship flight finish in 2019, he believes the Flames have potential to challenge for their first NCDG national title this spring.

"Our focus as a team has always been on nationals, competing well and trying to win a national championship," Ellingson said. "That vision hasn't changed. Obviously, not competing in the fall, the scheduling has been different, but practices haven't changed. We're still focused on getting better each and every week. A lot of us are traveling and playing in local events, events out of state, just doing everything we can to be ready when that time finally comes."

Bowman has encouraged his players to enter local and regional open tournaments this semester to sharpen their technical and tactical skills going into collegiate competitions in the spring.

"The local scene of tournaments has been growing and building, so there's been a lot for them to go to," he said. "Even though it's not collegiate tournament, it is still tournament experience which is hugely helpful and really creates that atmosphere for them to understand the pressures and importance of good shots and bad shots and how to play through the mental aspect of it all."

Bowman is not overly concerned about his players' extended time away from campus spanning the Thanksgiving and Christmas breaks.

"Everybody's going to have that same gap. I think we'll be stronger on the back side of it," he said, noting that those players who live locally will be able to compete in the Blue Ridge Area Winter League (BRAWL) Series. "We're looking for different opportunities and different outlets to make sure we can get to as many experiences for that collegiate format (in the spring)."