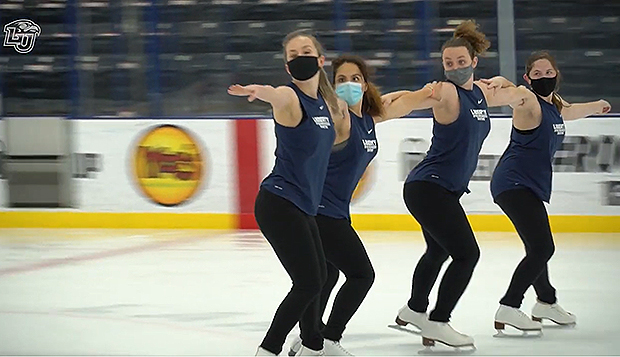 Seven freshmen and three sophomores make up the bulk of a roster led by senior captains Hannah Pulley and Emily Wilson.

With seven freshmen newcomers on a roster of 12 women, the fall semester has been a time of transition for Liberty University's synchronized skating team, under the direction of first-year Head Coach Emily Hughes.

Nine of the 12 skaters are also planning to compete on the Lady Flames' figure skating team this season, providing opportunity for them to fine-tune their freestyle form on the side.

"We have a majority of new skaters this year, complementing our strong returning skaters with some good incoming recruits," Hughes said.

Jacalyn Hagar, a Novice skater brings 13 years of synchro experience and knowledge in the sport. Jamie Gordon, a five-time gold medalist in freestyle who is also skilled in pair skating, is relatively new to synchro, but is catching on quickly.

"She is a type of person who enjoys a challenge, and has enjoyed learning something new," Hughes said.

Liberty's only two seniors will serve as first-year team captains: Emily Wilson, who is classified as a Senior Moves in the Field skater, and Hannah Pulley, a junior-level skater.

Between the two seniors, three sophomores, and seven freshmen, Hughes has a wide range of talent to work with.

"That is always the balance you have within a team environment, a variety of skill levels," she said. "We are being strategic with the program to challenge the new skaters, who are required to do one hour of practice individually in addition to team practice, so they can work on personally what they need to improve on."

Normally, the freshmen wouldn't have as much time to build up their fundamental skills because the Lady Flames would be competing in the fall, but due to COVID-19 cancelations, they have been able to focus on preparing for success over the next three seasons.

"It's very nice that we get to practice because a lot of teams in our division are not in practice yet," Liberty freshman Kristine Neumeyer said. "It's so cool to be a part of the team because it is my first year. I love college skating. It's just been a great experience because it's just great to have all of these girls be there to support you through everything that you are doing."

"It's been really awesome," Lady Flames freshman Emma Marnik added. "I've never been part of a synchro team before, so it's really cool just getting a team atmosphere and just being able to be with the girls and getting to know them. We are practicing really hard and getting ready for the spring semester."

This year, the Lady Flames will be skating in the Open Collegiate division, which requires a minimum of 8 and a maximum of 16 skaters, before returning to the Collegiate division next fall. They had moved up to that class for the first time in 2017.

"That will give us more flexibility if someone does actually get COVID or has an injury or has to be in quarantine," Hughes said, noting that the routine will feature 10 of the 12 skaters.

Liberty is anticipating entering two competitions — the Jan. 29-30 Eastern Synchronized Skating Sectionals in Norwood, Mass., and the Feb. 6 Synchro Illinois event in Oak Lawn, Ill. — before traveling to Adrian (Mich.) College to compete in the mid-April USA Synchronized Skating Collegiate National Championships for the fourth year in a row. The team placed 10th in the Collegiate division last spring.

"Hopefully all of those go as planned," Marnik said. "We just finished choreographing our program, so we're just perfecting it and getting ready to go for the season."

Hughes has been pleased with the way the new skaters have integrated with the returnees.

"Everyone has been very unified as a team," she said. "The girls coming in have fit in well in terms of the culture and environment here. Everyone has a really good attitude, in spite of COVID. They are looking on the bright side and I am proud of them in that respect."

She said Wilson and Pulley have been creative in organizing bonding activities outside of practice, including movie nights and a visit to a pumpkin patch, to help keep the team motivated.