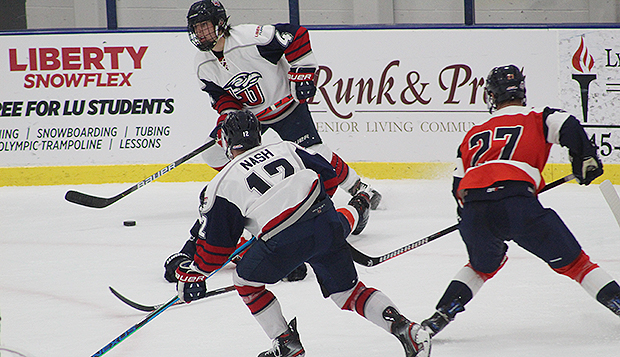 A 15-round shootout capped what appeared to be a championship prize fight between two ACHA Division II heavyweights, Thursday night at the LaHaye Ice Center.

Liberty University's ACHA Division II men's hockey team, which finished last season ranked No. 1 in the Southeast Region, played the University of Mary, which was ranked No. 1 in the West Region, to what officially counted as a 3-3 tie in the opener of the three-game series. After being outshot, 27-24, through three regulation periods and a five-minute overtime, the Flames came up on the short end of the marathon shootout, 3-2.

"It was definitely somebody we would have seen at (ACHA DII) National (Championships in Dallas)," Flames junior forward Joshua Malin said, noting that tournament was canceled by COVID-19. "It was a good test, especially early on in the year, to get our legs moving. Getting guys back on the ice and in game shape is definitely different than practice shape (but) we all played together and pulled the same rope coming back."

The Flames (0-0-1) started the scoring with a spectacular goal with 3:29 left in the first period. Senior forward Blake Flanders chased down a long outlet pass from sophomore forward Luke McFarlane that bounced off the left boards into the left circle and ripped a one-timed shot past goalie Kyle Hayden into the top-right corner of the cage.

Liberty extended its lead to 2-0 with 17:20 left in the second period on a tic-tac-toe pass sequence from junior forward Peyton Nash to junior defenseman J.D. George back to freshman forward Stephen Guadalajara, who put away his shot from in the left circle.

However, less than two minutes later, the Marauders got on the scoreboard when forward Alex Flicek took a long lead pass from defenseman Drew Lenertz beyond Liberty's defense in the high slot, skated in on Flames junior goalie Dakota Cyhaniuk, and lifted a wrist shot just beneath the crossbar, cutting the deficit to 2-1 at the 15:25 mark.

Mary netted the tying and go-ahead goals by forward Seth Cushing in a span of 34 seconds midway through the second period. On the first, he got behind the Flames' defense and finished an entry pass from Flicek with a backhander in the right crease past Cyhaniuk, tying it at 2-2 at the 8:56 mark. Then, after a turnover in Liberty's defensive zone, Marauders forward Kyler Moore dug a backhanded pass out from the right corner to Cushing cutting through the slot, where he lifted his shot into the upper netting for a 3-2 lead,

Less than a minute into the third period, with the Flames on the power play, Flanders skated the puck along the left boards before setting up Doe for the equalizer with a crossing pass into the slot for a top-shelf finish at the 19:03 mark.

In the final minute of regulation, Cyhaniuk made back-to-back saves of dangerous shots in the slot, the second with a high glove snare of a close-ranged slap shot.

After Mary killed a Liberty penalty early in the five-minute overtime, he made two more saves of high percentage shots, setting up the shootout.

"It was a tough one," Malin said. "The goalies were both good. It was definitely a goalie battle."

The two teams will meet again on Friday at 2:15 p.m., webcast live by LFSN, and Saturday at 7 p.m. back at the LaHaye Ice Center.

"We've got a long weekend ahead of us," Malin said. "We've got two more games to focus on. It is all about the next day."

Hughes said that the series could be a preview of a showdown in the April 15-20 ACHA DII National Championships in Boston, where the winner may have to play as many as five games in five days.

"You get three games against one of the top teams in the country, so it doesn't get any better than that," he said. "They have an older, more experienced team and they gave us everything we could handle. We had speed and we did well with that, but we definitely could have executed a little cleaner, and that's their strength. There's nowhere to go but up."