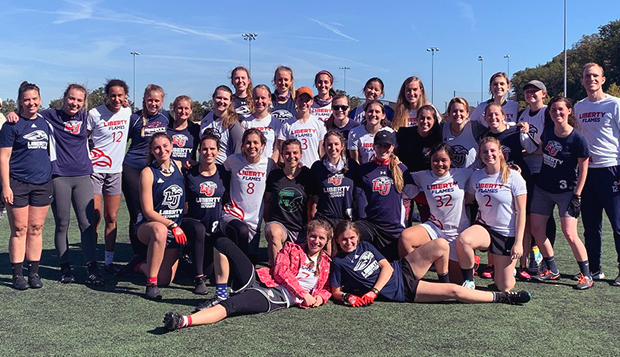 A talented mix of current players and returning alumnae showcased their talents during Sunday morning's contest.

Liberty University's Club Sports Ultimate program is marking its 10th anniversary in 2020 and to celebrate, the Flames and Lady Flames held their fifth annual men's and women's alumni games this past weekend at the Liberty Mountain Intramural Complex.

Before the men's team staged its first-ever victory over the alumni squad on Sunday afternoon, Liberty's women's roster showed resilience in a second-half comeback bid. cutting into an 8-2 halftime deficit before falling to a star-studded alumna team, 12-8.

"Our alumnae teams keep getting better and this was, in my opinion from top to bottom, the deepest roster they have ever assembled," said Lady Flames Head Coach Jonathan Mast. who helped to start the program in 2010 and has played in all five men's alumni contests. "Of the 16 players who showed up, all but three have played club (Ultimate) after graduating from Liberty, a couple on elite clubs."

He was encouraged by the way his 15 players available, out of an 18-woman roster made up mostly of freshmen and sophomores, performed in defeat.

"The roster we have now is very, very strong and I have really high hopes that we're going to have a dominant season after seeing us compete the way we did against them," Mast said. "Both teams were firing back and forth. That was our first experience against real defense with real pressure, and they started slowly but snapped out of it in the second half, which is indicative of how strong we're going to be in the spring semester."

He said all three of his captains — graduate Victoria Dissmore who was granted an extra year of eligibility after last season was cut short by COVID-19, and seniors Bethany Fowle and Mikayla DiSarle — played stellar games.

"All three of them played phenomenally well," Mast said. "Victoria is a jack of all trades, a very well-rounded player."

"She has really matured and her decision-making has really improved as well," Mast said. "We are expecting big things from all four of them. We depend on Brianna to help with the flow of the offense, and with her deep throwing ability. A lot of the goals that we had in the second half came off hucks from her to either Victoria or Bethany. They were very pretty throws."

Mast said an offseason conditioning program from June to August helped the Lady Flames to not lose a step when they returned, even amid a pandemic.

"They all came back in shape," he said, noting that he is hopeful they will stay motivated to maintain that fitness from Thanksgiving through the Christmas break. "" . Lord willing, we will have our first (collegiate) tournament at the end of January or in early February."

In the meantime, he and his wife, Assistant Coach Ashley Mast, will continue to challenge them in practice.

"We are looking to use the rest of the fall semester to do a combination of fundamental drills to develop the younger players and scrimmage simulation to help the returning players," Jonathan Mast said of the mix of offensive plays and defensive strategies they will work on in intra-squad scenarios. "Because we are so physically fit, we will play mostly person-to-person or ‘match' defense."

He said the biggest difference in the team's approach this year is that the players will be used in multiple positions, with practices designed to increase their levels of versatility so that they will be able to rotate through the offense by the time the spring season starts. 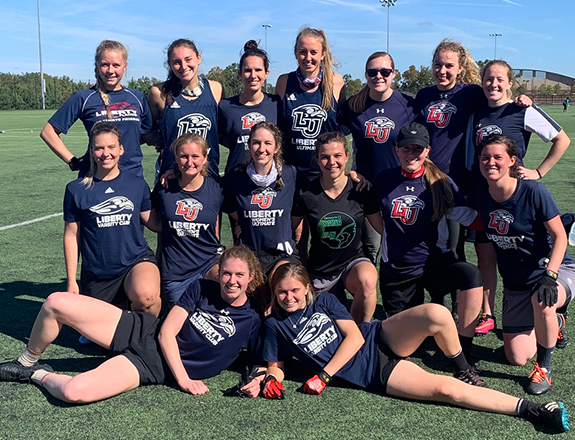