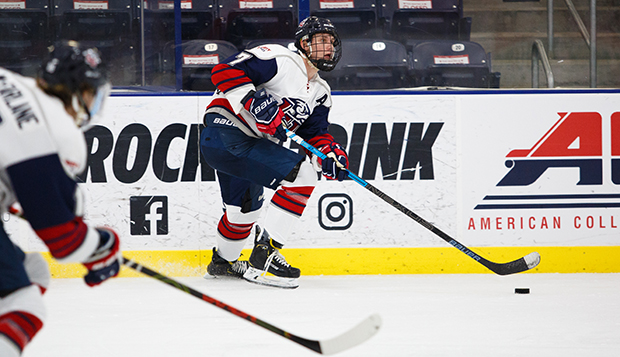 After rising to the No. 1 spot in the ACHA Division II Southeast Region rankings by the end of the 2019-20 regular season and winning its first Mid-Atlantic Collegiate Hockey (MACH) tournament title since 2017, Liberty University's ACHA DII men's hockey team (30-3-1) was left with some unfinished business when COVID-19 canceled the ACHA DII National Championships near Dallas.

The Flames, who return 19 players from last season's squad, including three of four captains, are eager to earn a return bid to the 2021 National Championships, set for April 15-20 in Boston, where they could contend for the first national title in program history.

"It's been a long break, but we have picked up from where we left off to a certain degree because we had so many guys coming back," Head Coach Ben Hughes said, who has two freshmen recruits — Stephen Guadalajara, a defenseman from Dallas, and Trevor Granzow, a forward from Michigan — to  replace the two players lost to graduation, but did lose four others to the Flames' DI and DIII teams.

Liberty will receive an excellent first test from another ACHA DII regional power, the University of Mary out of Bismarck, N.D., this Thursday (7 p.m.), Friday (2:15 p.m.), and Saturday (7 p.m.) at the LaHaye Ice Center.

"Our guys are going to be baptized by fire, for sure, but I know they are excited for the challenge," Hughes said, noting that the Marauders have finished ranked in the top three in their region in each of their three seasons since the program started in 2017. "They are one of the top DII programs in the ACHA and we are thrilled that they're coming and we get to play them three times. They are run very professionally by Head Coach Dan Huntley, who does a tremendous job in recruiting at rinks around the nation and is highly motivated to get the top talent."

Liberty certainly has plenty of talent to go around this season, led by its three returning captains — senior forwards Blake Flanders and Michael Niederer and junior goalie Adam Partridge.

"Their leadership and commitment to the team and each other pretty special," Hughes said. "A lot of the credit and success of the team has to do with the leadership along with multiple other players rowing the boat in the same direction."

Liberty has 13 forwards, six defensemen, and two of the top goalies in the nation — Partridge and junior Dylan Cyhaniuk — on its 21-man roster.

"Our goalie tandem is one of the top in the country," Hughes said. "They are both so good, there is definitely a battle to figure out who is going to start, which is such a good problem to have."

"Overall, our strategy is going to be the same coming off of last year's success," Hughes said. "We want to play fast, be quick on the transition, quick on the break outs, and effective on the forecheck."

"They're all going to have to step up and we have got to play more collectively as a unit," Hughes said. "Alex was so dynamic and played such a big role and took up a lot of minutes on the ice."

After this weekend's series, the Flames will conclude their fall semester schedule with two games against North Carolina State, Nov. 6-7 at home, before opening MACH conference play in January.

The Wolfpack defeated Liberty in a showcase last year after keeping the Flames out of nationals in Dallas in 2019 by upsetting them in the Southeast Region tournament final at the LIC.

Hughes hopes to avoid that scenario by securing another autobid with a top-two regional ranking.

"That's definitely a goal of ours, and I think it's realistic with our experience and maturity," he said. "This can be a pretty resilient group of guys."