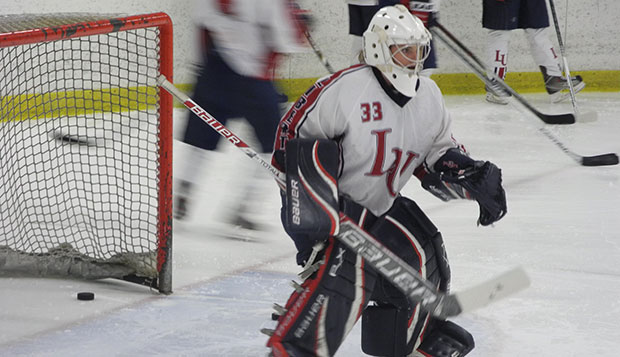 Liberty sophomore goalie Samantha Rupp, who had posted her sixth shutout of the season in Friday's 6-0 rout of the Golden Gophers, faced Minnesota again from between the pipes Sunday.

Though the journey wasn't always easy, for members of Liberty University's Division I women's hockey team, the sweat, striving, and sacrifice was worth the reward that awaited them in the end.

The road to the first-ever ACHA national championship game in the history of the program wound up on the East Rink at the Ashburn (Va.) Ice House, 30 miles west of Washington, D.C.

Unfortunately, the puck stopped there for Liberty, which was shut out 2-0 in the final by Minnesota, a team they had blanked by a 6-0 count in Friday's third round of pool play. The Lady Flames (29-3) finish as ACHA DI runners-up, as the Golden Gophers (22-4-1) were last year.

Along the way, the road to the final took Liberty to Boston where they edged defending ACHA DI champion Northeastern, 4-3 on Oct. 14, two days after completing a two-game sweep of Vermont in Burlington. It went through Wisconsin, where the Lady Flames split two games with Minnesota, and Chicago, where they split two games with Robert Morris Illinois, the team they barely survived in double overtime in Saturday's semifinals.

Liberty rose to the No. 1 ranking after beating the Golden Gophers in late November and stayed there for the final three ACHA DI polls, beating two NCAA Division III teams in the process.

With a bull's eye on their backs, as the No. 1 seed throughout the tournament, the Lady Flames (29-3) overcame every obstacle in their path en route to the final, playing as true champions, with sportsmanship and grace to match their athleticism and grit.

However, playing their fifth game in four days, including the double-OT victory on Saturday, Liberty lacked its usual spark and speed. The Lady Flames, whose greatest strength is their speed, weren't quite as quick playing on tired legs, and were forced to regroup and try to rally from behind from late in the first period on.

"We came out first period and we had the jitters from just being nervous and how much this game meant," Liberty senior forward Carly Peleshok said. "It was just hard to get our legs moving and it cost us."

Minnesota (22-4-1) came out on attack and didn't let up, outshooting the Lady Flames 16-4 and scoring the only goal of the first period 15 minutes, 41 seconds in on what looked like a rugby scrum in front of the net. With all five of the Golden Gophers huddled around the cage, Lauren Kirchoff put away a point-blank putback of an initial shot by fellow freshman defender Madison Ellis for a 1-0 lead.

They stretched it to a two-goal advantage 15:34 into the second period on a breakaway goal by Kirchoff moments after Liberty's Courtney Fischer's slap shot from near the right side of Minnesota's blue line was inadvertently blocked by teammate Laura Del Monte. Kirchoff had her first shot shot saved low by sophomore goalie Samantha Rupp but recovered the rebound and lifted a left-handed wrist shot over Rupp's stick side into the left of the net.

"It was hard for us to try to get our momentum back up after giving up a couple goals," Peleshok said. "Their forecheck was really strong, they did a good job of sending a girl in deep and it was hard for us to even work out of our zone. We tried our best and it just wasn't enough today."

Liberty threatened in the final minutes of the second period with two quality chances on follows of shots from the blue line by Madi Fischer and Autumn Kucharczyk, but Golden Gophers goalie Samantha Balster snuffed them both, the last two by Stacey McCombe.

McCombe had another opportunity from close range late in the third period when she crashed over a pile in front of the cage, but couldn't get a stick on the loose puck. Seconds later, Peleshok and Del Monte crashed into the end boards after colliding in the crease and Liberty called time out with 1:30 left in regulation.

But Minnesota, which outshot Liberty 43-29 for the game, actually had more quality shot attempts in the final 90 seconds before the Lady Flames pulled Rupp and McCombe set up Sarah Stevenson for a shot that deflected just over the Golden Gophers' goal.