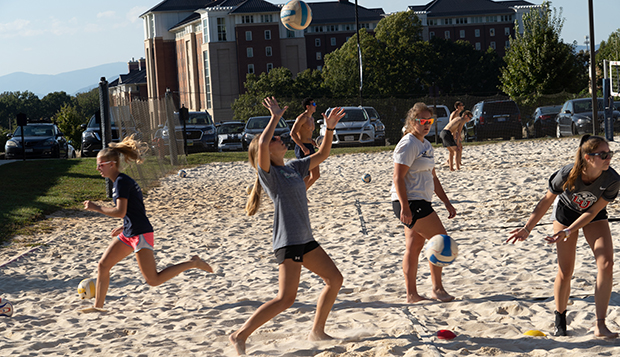 Kaityln Holbrook practices her serve, surrounded by her new teammates, during Tuesday's practice on East Campus.

As one of nine newcomers to Liberty University's women's beach volleyball team, Kaitlyn Holbrook, a sophomore transfer from NCAA Division I Coastal Carolina, may have the most experience playing on sand.

"I started playing beach in seventh grade and just absolutely fell in love with it," said Holbrook, who is from the Greensboro, N.C., area, where she grew up playing libero on her indoor teams and developed her outdoor game on the Beach South club team. "Every single play is different and you have to think about the sun, the wind, and how you are going to hit the ball, so it's a lot more strategy, which I enjoy, rather than in indoor."

Lady Flames Assistant Coach Jessica Nelson, who also played for Liberty's indoor team as an undergraduate, is excited to have all of the incoming freshmen to work with, especially a player like Holbrook who can help elevate the play of her teammates.

"She is bringing in a ton of experience, and we are really fortunate to have someone with that kind of beach volleyball IQ," Nelson said. "She is loving Liberty and the spiritual aspect of the school has helped open up as quite a bit of her character and personality. She brings a lot to the team and is a great addition for the cultural aspect."

Holbrook, who is pursing a B.S. degree in Business Administration: Marketing and Sales Management, and a minor in psychology, has adjusted quickly to playing with the Lady Flames and is finding her niche spiritually and socially.

"It's been a great transition from Coastal to here so far," she said. "Liberty is such a unique and special place. Everyone is super nice to you, and the girls are super welcoming on the team. We've had some team bonding activities and we all help each other throughout the drills and text each other if we're on campus to go out to lunch. My faith has grown so much over the past (two months) and being constantly surrounded by believers and at Campus Community and through professors, it has made it such an easy transition."

Beach volleyball has helped her maintain a balance between her academic and athletic pursuits.

"You just have to have that outlet, just to like relax and destress and everything from school, and volleyball's been a big part of it," she said.

Holbrook considers herself a well-rounded defender who tries to maintain a positive attitude and always stay on her toes and quick on her feet.

"Being a defender for indoor, that's helped me to cover the court," she said. "But when I came to the beach game, I had to learn how to hit because these girls are like 6-foot-3 or 6-4 and they go up and bang the ball. I really had to readjust and relearn how to do that as a defender, but usually, I'll just stay in the back row or I'll split block. Hopefully, I may get paired with a taller person."

Holbrook has been impressed with the diversity of talent on the Lady Flames' roster this fall.

"A lot of the girls have different abilities and aspects to bring to the table," she said. "Some of them are huge blockers and some of them are smaller defenders. It's interesting to just like mesh with other people and see how you play."

She has benefitted from the instruction from Nelson and Head Coach Kaleb VanDePerre, who also coaches Liberty's men's indoor and beach teams.

"Every single coach coaches differently, but both Coastal and Liberty have great coaches," Holbrook said. "They're always very positive, and they'll tell you what you need to do to win the game and how to get better and how to grow as a player, too."

Nelson also serves as a professional advisor for Club Sports and works directly with all of her team members, answering questions about classes and schedules.

"Jess helps a lot with being there for positive encouragement," Holbrook said. "Kaleb, on the other hand, is a lot more technical, so when we are hitting, making sure we get our last two steps there before we approach to hit the ball. They both definitely balance each other out with what we are looking for to get better as a player."

Holbrook has helped coach the rapidly growing Virginia Sand club program that VanDePerre directs in Central Virginia, working on Tuesday and Thursday nights with some of the high school players training to play in college.

One might expect her allegiances to be torn when Liberty's football team concludes its regular season at former Big South Conference rival Coastal Carolina on Dec. 5.

"That's a tough one. It's funny because my dad went to Virginia Tech and Liberty plays Virginia Tech, too (Nov. 7), so he's like ‘Kaitlyn, it's a divided household. You were born and bred to cheer for the Hokies, and now you're a Flame so what are you going to do?' Fan the Flames! I hope Liberty wins." 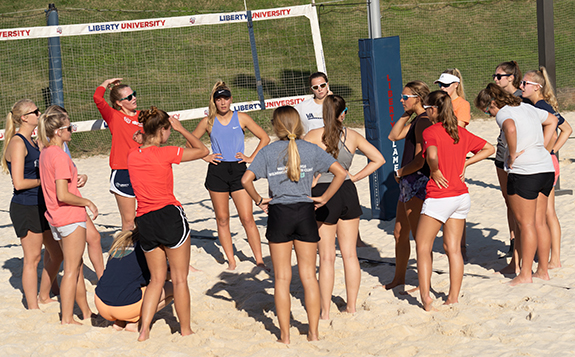