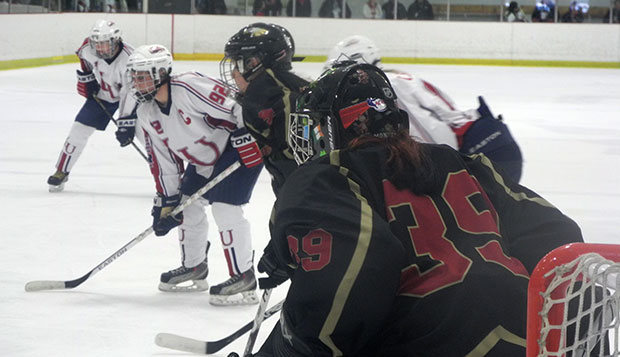 Liberty senior forward Stacey McCombe (92), who scored the game's first goal, awaits the start of the Lady Flames' 5-on-3 power play in the closing seconds of the first overtime in a 2-1 ACHA DI national semifinal triumph over Robert Morris.

Freshman center Carrie Jickling didn't get much sleep Friday night, not because of nerves or butterflies before Saturday morning's first semifinal of the ACHA DI national championships, but a stomach bug.

Still, she persevered and delivered the game-winning goal in the opening 25 seconds of the second overtime to revive top-ranked Liberty University's Division I women's hockey team with a dramatic 2-1 triumph over fourth-seeded rival Robert Morris Illinois.

"Carrie did a great job," senior forward Carly Peleshok said. "She really deserved that goal. She's sick and she just hustled through it and she did great. We just buckled down, focused, really cycled the puck well and communicated and that's what ended up scoring the goal."

Liberty ended the first five-minute overtime period and started the second 20-minute extra stanza on a 5-on-3 power play, after killing one by the Eagles in the final eight minutes of regulation. The Lady Flames used their numbers to their advantage soon after winning the opening faceoff.

"That's the way you've got to beat those big goalies," Liberty head coach Paul Bloomfield said. "You don't want anybody getting hurt, but you've got to put people in front of the net that are going to tip (the puck) or block her view. Everybody's banging on everybody in there to get them out and part of that whole melee is they had girls blocking her view, too."

The Lady Flames (29-2) have enjoyed a near home-ice edge for the entire tournament, played at the Ashburn (Va.) Ice House, located 30 miles west of Washington, D.C.

Backed by a faithful following of fans from Lynchburg, and many family members who made the trek from all parts of Canada, Liberty will face third-seeded Minnesota, a 5-1 winner over second-seeded Massachusetts in Saturday's second semifinal, in Sunday's 3:15 p.m. final, seeking the first national championship in program history. Fans can watch a live webcast of the contest on pay-per-view.

"It was good, great, awesome," Bloomfield said of advancing to the final. "I told the girls when it started, I don't want to even think about third or fourth place. We're here to win a championship."

"We've always had good competition with this team," Liberty sophomore goalie Samantha Rupp added of Robert Morris. "They're pretty good rivals (and) we were very even with them. They're very physical and we knew it was going to be a rough game. There was lots of intensity and the atmosphere was great. We had so many fans here it helped so much."

The Lady Flames  get a rematch of Friday's 6-0 rout of the Golden Gophers in the third round of pool play, expecting a better challenge in the final after splitting two games against Minnesota at Wisconsin in November.

"I love it," Rupp said after repelling 26 shots to preserve the victory. "Absolutely, I'm so excited. I don't care who it is, but we're going to win."

Senior forward Stacey McCombe, who along with Rupp was selected to the All-ACHA DI first team, announced before the third period, increased her team-high goal total to 22 and lifted the Lady Flames to a 1-0 lead in the final 42 seconds of the first period. She put away a follow of Autumn Kucharczyk's slapshot from the top of the right circle and rebound attempts by Sarah Stevenson and Jenny McArthur with an open-net finish in the left crease past RM goalie Staci Pomering.

"Our coaches told us to go 90 miles per hour into the net and I just tried to do what they said," McCombe said.

"Their goalie's phenomenal, a really good goalie," Bloomfield added. "Not as good as ours, obviously."

However, he considered starting 5-foot-7 sophomore Chantal Lischynski, who played in last year's national tournament, or 5-10 freshman Kristina Toppazzini instead of Rupp against the bigger, more physical Eagles.

"We debated whether to put her in because of her size (Rupp stands 5-foot-3) and the fact that she had already played (in the tournament's first and third games)," Bloomfield said. "We just had to follow our heart. She's been so strong the last two or three games, we just felt like the girls needed to play in front of her and she did a great job. Sam stood her ground and did a phenomenal job again."

That was especially true toward the end of the second period, throughout the third and into overtime, when Robert Morris had multiple power-play opportunities and Rupp stopped several point-blank shots on goal.

"Sam did a great job," Peleshok said. "She played the puck and she kept us in it. She was a stone wall for us and that was a big thing because we really needed that goaltending. She deserves all the credit, too."

The Eagles nearly netted the equalizer in the closing seconds of the second period, a split second after Rupp blocked a quality chance in the right crease by Chelsea Kasprick. But the whistle blew before a putback found the back of the net.

Just 2:12 into the third period, the Eagles did cash in on the tying goal when Kasprick netted her 29th of the year off assists from Jordyn Tremain and Lucia Plyer. But the Lady Flames weathered the storm and survived a couple more power plays, including the 5-on-3 for a minute-long stretch.

"Penalties were brutal," Bloomfield said. "Our power play and our penalty kill was phenomenal today. The girls kept battling back, never quit and I kept saying, ‘You can do this.' I felt we had the better team, but they're big and they just kept coming after us.

"They're a big, physical team and the main thing that bothered me a little bit was we got some bad calls and then you get behind the 8-ball because all you're doing is killing penalties," he added. "We struggled through them and what a great finish."