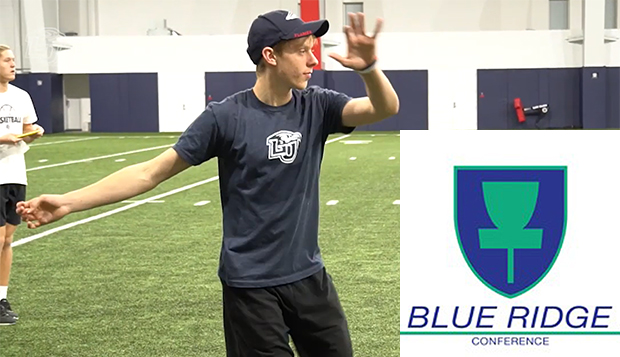 Sophomore Stephen Curry follows through on a shot during a team session in the Liberty Indoor Practice Facility.

Amid the uncertainty surrounding the 2020-21 season, Liberty University disc golf Head Coach Steve Bowman has been working to build the fledgling Blue Ridge Conference (BRC) into an 8-10-team league for intercollegiate competition this fall and for the foreseeable future.

While regional rival North Carolina State is not expected remain in the conference as it will likely form its own this season, the Flames hope to schedule regular-season matches against the likes of Appalachian Bible College, East Carolina University, Eastern Mennonite University, East Tennessee State University, Marshall University, Milligan, Virginia Tech, and West Virginia, among others.

"Most colleges' disc golf teams are student-run, and when those players graduate, the teams often die off," Bowman said. "Having the conference might encourage the next generation in building it forward."

Though COVID-19 canceled the 2020 Collegiate Disc Golf National Championships (CDGNC) originally scheduled for April near Winthrop University in Rock Hill, S.C., it has only increased interest in the sport over the summer as a fun outdoor activity conducive to socially distancing.

"(COVID) has spurred on the popularity of disc golf everywhere," Bowman said. "It helps that you are outside and distanced from a lot of people. I am confident we can make the logistics work with the Governor's orders of no more than 50 people in one space."

Bowman said Liberty would be the magnet location to host the majority of BRC events, which will be one-day and not overnight as in the past.

"We want to keep it to where each drives two hours, then plays eight hours and drives two hours back," he said. "It will be a long day, but teams will come in and be gone. The furthest school in the conference now is four hours away, so to meet them in the middle somewhere would be good."

Before putting on the eighth-annual Flamethrower Invitational national qualifier in the spring, Liberty could potentially host a conference championship with a shotgun start to spread out the field on its two 20-hole courses before Thanksgiving.

Unlike the Flamethrower, that BRC championship tournament will not serve as a qualifier for nationals, again set for April at Rock Hill, site of the United States Disc Golf Championships (USDGC) though it may in future years.

Maintenance and renovation work is continuing on the Flames' two courses,  with new tee pads in place on the one near the Hydaway Outdoor Center and the East Campus venue due to receive a 10th anniversary facelift this year.

The Flames and Lady Flames held tryouts this week and had more than 30 prospects show up to complement the 12 returning players. Bowman kept a record-sized roster of 28, including 24 men, with hopes of adding two more women this semester to form a third ladies tandem. Ten players — two four-man teams and one two-women tandem — will be on the travel team.

One of the top incoming recruits is Triston Lambert from Williamsburg, Va., who Bowman expects to match up well with his top flight men's team of sophomores Stephen Curry and Justin Rosak, junior Spencer Ellingson, and graduate Dustin Barrett.

"They're all about the same level and they are super excited to be ready to play," Bowman said. "Three of them have played together so it will just be a matter of getting them to jell together."