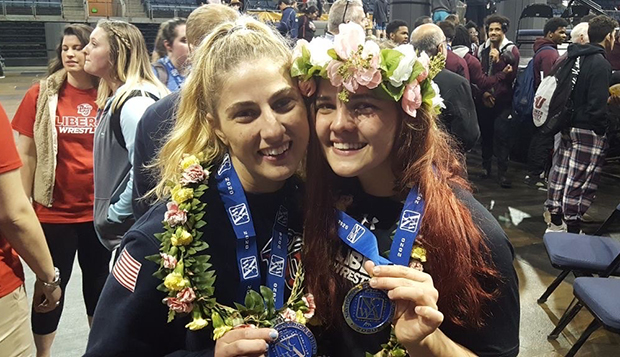 After winning an NCWA national championship in her first season on Liberty University's women's wrestling team in 2019 and finishing her career as an NCWA national runner-up this past spring, Charisse Manley was named head coach of the Lady Flames' fourth-year program last week.

Manley, who completed her master's degree in marriage and family counseling in May, ran the majority of the women's wrestling practices last season under the supervision of Head Coach Josh McIlhenny, who will now focus on his assistant coaching duties with the men's team.

She is the older sister of four-time national champion Cendal Manley, who finished her undergraduate degree in psychology: counseling and is starting her master's degree at Liberty this fall.

"I love wrestling and I love to compete," Charisse Manley said. "We had a great season last year. It is my passion and my sister's passion to be able to pass that on to other women, applying what we've learned and figuring out what we need to improve. I am excited to be able to continue that with Liberty's women's wrestling team."

Flames Head Coach Jesse Castro said Manley can help bridge the gap between the success she and her sister experienced on the mat to a new class of wrestlers starting this fall and those joining the program in the foreseeable future.

"This is a good entry point for her because she has established relationships with the girls, and has proven herself athletically to them," he said. "She has shown good leadership with the team, and spiritually, she will set a good foundation to build on. Josh will serve as an advisor on the side, giving her some technical advice."

Manley is optimistic about what the 2020-21 season will look like, even in the midst of an ongoing pandemic. She has tailored her preseason preparations around conditioning rather than sparring sessions out of the wrestling program's new space in the Club Sports Training Complex.

"For now, at least until things hopefully and prayerfully change for the better, we are going to be focusing on training our bodies, so weight lifting and running and CrossFit and just getting the body back in shape until we can get onto the mats," Manley said.

Before open tryouts set for September, the Lady Flames' roster stands at six team members, including two new recruits from the Manley sisters' home state of Hawaii. COVID-19 has made scheduling matches difficult this fall, so Manley is seeking to foster a family atmosphere where Christ takes center stage and wrestling is secondary.

"Coach Castro and I were talking about this (recently), without specific competition available to us this semester, we need to focus on the opportunity for these teams to be a community, where Christ is cultivated and relationships are formed, and just using wrestling as a way of building a bond," she said. "We want to be training for the competition that life brings when we don't necessarily have a specific match that's on a mat. I think that the Lord has given us wrestling as a way to kind of wrestle through some of the spiritual things we have experienced in life."

Castro plans to take the same approach with the men's wrestlers he coaches, building character that will translate to success on and off the mat.

"That's the goal for our team, to strengthen our culture and maintain the mission of the program, and keep it in line with the spiritual ideals that Dr. (Jerry) Falwell (Sr.) instilled when he founded the university (in 1971)," he said.

The Manley sisters wrestled with a "never give up" mentality that helped them overcome odds and deficits to win the majority of their matches. As head coach, Charisse Manley wants to inspire the Lady Flames to take the same attitude into every match.

"This sport is mostly mental because your body can do so much more than you actually think that it can, and if you get your head there, most of the time, your body will follow," she said. "It's just building that mentality that I'm not going to quit, and that no matter what my body is telling me right now, mentally, I know that I can do more. To establish that mindset that when you are down in a match, you don't give up. You keep going to the end, you never know what's going to happen, and you don't freak out. You stay emotionally regulated; you stay in control."

She wants to establish a positive work ethic in the wrestlers' training that will pay dividends when the season starts, likely in the spring semester.

"We always tell our girls and what me and my sister have done on the mat, we might not be the most skilled or the most technical wrestlers, but we're going to give them a fight," Manley said. "If they are better than us, technically, we're going to be able to last longer than they are in conditioning and that's what's going to take us to the end where our hand's raised. I really like to focus on, yes technique, but let's get you in great shape, better shape than anyone else, because that's something we can control."