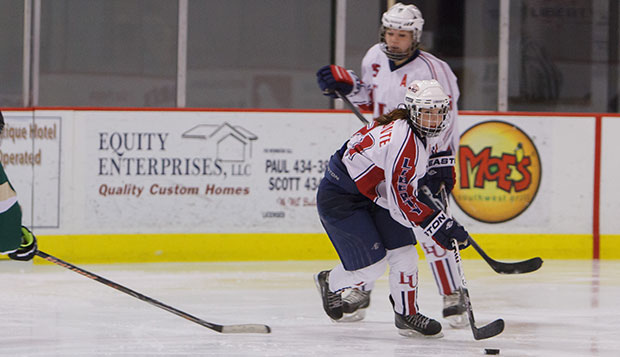 A counterattack goal immediately after a second-period penalty kill lifted Liberty University's Division I women's hockey team to a 3-0 lead en route to a 5-0 thrashing of third-seeded Minnesota in Friday afternoon's third round of the ACHA Division I national tournament at The Ashburn (Va.) Ice House.

The Golden Gophers mounted three serious threats during the two-minute power play early in the second, with Lady Flames sophomore goalie Samantha Rupp blocking a shot by Ellie Gleason and smothering a follow-up attempt on the third.

Rupp posted her sixth shutout of the season, dropping her goals-against average below 1.00.

"Everybody played really well, but Sam was absolutely outstanding in net today," Liberty head coach Paul Bloomfield said, noting Minnesota actually outshot the Lady Flames 33-29 for the game. "She saved our bacon in net today four or five times. She did an outstanding job."

On the ensuing faceoff, Liberty freshman defender Autumn Kucharczyk caught the puck in front of Rupp and started a fast break with an outlet to the right wing. Carrie Jickling flagged it down and skated past a defender before sliding an assist to Laura Del Monte for a point-blank putaway in the left crease.

"We call it the green line," Bloomfield said. "They were just firing, doing an amazing job. They're just clicking."

The Golden Gophers (14-3-1) had dominated their first two opponents (Rhode Island and Michigan) by a 10-1 margin on Thursday, but the Lady Flames didn't waste any time showing who was the No. 1 team in the nation for the last three ACHA DI polls.

"The girls really played well," Bloomfield said. "(Minnesota) was really, really strong, but our girls wanted it so bad, they kept going. It was amazing. It was an awesome game."

The Lady Flames, who beat the Wolverines 3-1 and Rams 6-0 on Thursday, established early control against the Golden Gophers when senior forward Stacey McCombe, Liberty's leading scorer, skated down the right edge and sent a crossing feed to Sarah Stevenson in the right crease. From there, she lifted a wrist shot top shelf past Minnesota goalie Samantha Balster for a 1-0 lead less than five minutes into the action. Just 42 seconds later, Peleshok recovered a loose puck in the left corner, skated in toward the left crease and snuck her shot inside the right post for a 2-0 advantage.

Kucharczyk made it 4-0 midway through the second period with a blistering wrist shot from the left circle that flipped off the glove of Balster into the back of the net. Late in the second, Jickling chased down a lead pass in the left corner and sent a beautiful crossing pass to Peleshok near the right post where she put away her second goal and the Golden Gophers in one fell swoop from short range.

The Lady Flames (28-2), seeking their first-ever national title, and the rest of the tournament's top four seeds advance to this weekend's Frozen Four. Liberty, the only undefeated team left in the field, will play fourth-seeded Robert Morris Illinois (28-7) in Saturday's first semifinal at 11 a.m. before Minnesota takes on second-seeded Massachusetts (19-5-2) in the second at 1:15 p.m. UMass edged RM 2-1 in Friday's morning game.

The winners of Saturday's semifinals will meet for the championship at 3 p.m. Sunday following the 11 a.m. consolation final to determine third place.

Liberty split two games at Robert Morris in Chicago's Edge Arena in January, losing a physical battle on the second contest after Rupp posted a shutout in the opener.

Lady Flames fans can tune in to a live webcast of the game on pay-per-view.