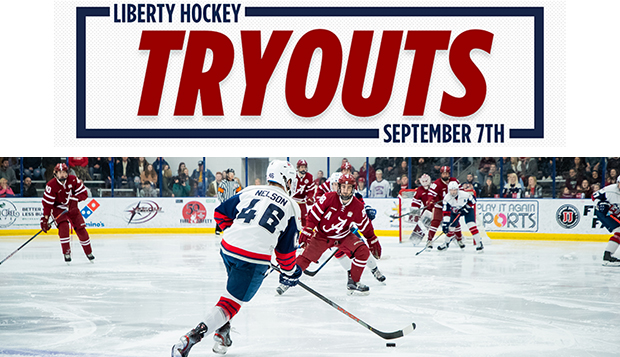 Tryouts for the Division I men's team will start at 2:45 p.m. each day from Sept. 7-11, with DII and III tryouts staggered between afternoon and evening shifts at the LaHaye Ice Center.

After hosting record numbers of players at the annual Flames Prospect Camp, held in late June, Liberty University's men's hockey program will offer open tryouts for its ACHA Division I, II, and III teams throughout the week of Sept. 7-11 at the LaHaye Ice Center. Tryouts are free and open to any incoming residential student. Registration is required and available online.

"We want all students who play hockey to come out and compete and hopefully earn a spot on one of the three teams," said DII Assistant Coach Matt Cruickshank, who also serves as Club Sports Graduate Assistant for Recruiting. "We are expecting three full groups, with enough players to form two teams in each group. On the first day, we will gauge where everyone is at, and make sure they are competing with the right players."

All the sessions are in the afternoon and evening, with the DI men's tryouts starting at 2:45 p.m. each day and the DII and DIII schedules on a rotating basis.

"Technically, the tryouts will run Monday through Friday with all three teams selected by the end of the week," Cruickshank said. "These could be some of the most competitive tryouts we've ever had, with a lot of fighting and battling for positions on all three levels."

He said players who participated in Liberty's Summer Hockey Camps as incoming freshmen gave themselves a leg up on the competition.

"The fact we can train and disciple these kids when they're young is great," Cruickshank said. "Those who came to our U-18 summer ID camp saw the campus and the rink, and are now enrolled and already skating here in school have had an opportunity to make a first impression."

Policies will be in place in the LaHaye Ice Center to prevent the potential spread of COVID-19, with all players having their temperatures taken and filling out questionnaires every time they come into the rink and maintaining 6 feet of social distancing except when they are on the ice or the bench.

"Hockey is one of those sports where you can't really enforce social distancing in competition," Cruickshank said. "We will do everything we can to make sure we follow the rules and are safe."

Normally, tryouts are held starting the Sunday before the first week of classes, which is this coming week, but have been pushed back by two weeks out of extra caution.

"We have a lot of international students, players from Canada and as far away as Lithuania, who have to do a 14-day quarantine," Cruickshank said.