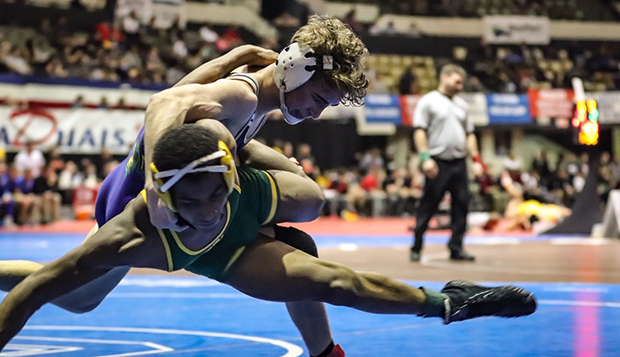 Brandon Ahlemann, a four-time Virginia High School League state place-winner and two-year team captain at Skyline High School in Front Royal, Va., has equally ambitious goals for his academic and athletic career at Liberty University, as he arrives today as one of 14 recruits for the Flames' men's wrestling team.

He plans to major in computer science — cyber security while enrolled in Liberty's Army ROTC program.

"It will be a lot, but I am looking forward to the challenge," Ahlemann said. "I have prepared myself as much as I can. If there's a will, there's a way."

"We had a long conversation about what it would look like to wrestle in college and if he would be able to handle it," Liberty Assistant Coach Chris Williamson added. "He said, ‘I'm not a quitter. Once I start something, I finish it.' I know that ROTC will be such a demanding part of his education, and we will have to work around his schedule, (but) I am excited for him."

Ahlemann grew up as a pastor's son in a very patriotic family, which inspired him to pursue the military route.

"ROTC will go hand-in-hand with wrestling," he said. "I have wrestled since fourth grade, so I know how much discipline that takes and I plan to apply the same approach to ROTC."

His father, Greg Ahlemann, attended Liberty for a couple years and encouraged him to follow his footsteps back to Lynchburg, Va.

"My grandpa (Jay, a pastor for the past 50 years) and dad are big Liberty fans," Ahlemann said. "Liberty was kind of like my dream school since I was little and I came down for a couple football games and that made me more excited to come here."

He was introduced to wrestling by travel soccer teammates who were among the most physically fit on the team.

"I had never heard of wrestling at the time, but I tried it out, fell in love with the sport and never looked back," he said. "I like the individual aspect of it. In soccer, there is only so much you can control. With wrestling, it all relies on you. The team, culture, coaching, and level of wrestling in the room plays a great role, but at the end of the day, if you don't put in the work, you're not going to have success. I am not the most athletic person in the room, but I can thrive in wrestling."

Ahlemann amassed a 172-35 record at Skyline, placing fifth in the Group 3A state meet in Salem, Va., at 106 pounds as a freshman, third at 113 as a sophomore, fourth at 126 as a junior, and third at 132 as a senior, setting a school record for most pins for his career.

He expects to wrestle between 141 and 149 pounds for the Flames.

"I'll go wherever the team needs me," he said.

Coming off a summer when he has had to find creative ways to stay in shape, mostly outside of the wrestling room, Ahlemann is excited to get into Liberty's new Club Sports Training Complex, home to the wrestling team, and to begin working with Williamson and Head Coach Jesse Castro.

"This whole COVID thing has made me miss being in the room and I'm looking forward to it more than ever," he said. "Coming back in there and being able to wrestle with that level of coaching and that level of other wrestlers in the room, it's going to be great."