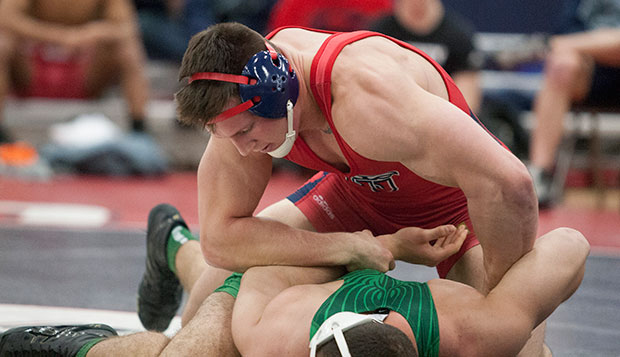 Aaron Thompson competes against Southern Virginia in a Feb. 21, 2014 match at the LaHaye Multipurpose Center.

Thompson, who won the 2012 NCWA 197-pound title in Daytona Beach, Fla. — on the same day but seven matches after Club Sports Hall of Fame inductee Scott Clymer captured the 133-pound crown — has applied the same work ethic he brought to the mat to his chosen profession.

"There were a lot of things instilled in me as an athlete that have paid off in my career, especially being self-motivated and disciplined which came from wrestling," said Thompson, a three-year team captain and three-time NCWA All-American for the Flames, also placing fourth as a sophomore and second as a senior. "In everyday life now, especially in work, those play a role in my day-to-day success."

He has taken an others-centered approach to his job as a senior sales representative, delivering medical supplies to hospitals and treatment centers throughout Northern Virginia and Washington, D.C.

"It is a rewarding job and career on multiple levels," Thompson said. "I am able to provide whatever the surgeons may need to allow them to go into each procedure and be as efficient and as effective as possible to provide the best outcome for each patient."

He was inspired at an early age by a family friend on the same career path to go into the medical field.

"He explained how you can provide well for your family but also have a passion and a purpose for what you are doing," Thompson said. "Each and every day, case, and procedure is different, so it keeps you on your toes, but I'm a pretty high-energy guy and I like that about it."

Thompson was positively influenced by his six years spent at Liberty, where he earned his B.S. in Sport Management in 2012 and M.S. in Athletic Administration in 2014, while working as an associate for the Flames Club.

"I really enjoyed my time at Liberty," Thompson said. "It allowed me to grow spiritually and built a strong foundation. I had access to everything I needed as a student and an athlete and I am thankful for the opportunities that were provided there, which have paid dividends spiritually later in life."

He also met his wife, Sara, at Liberty before she graduated with a B.S. in Nursing in 2013. She now works as a night-shift registered nurse on the Med-Surg Unit at Spotsylvania Regional Medical Center. The couple welcomed their second daughter, Josie, into the world on Wednesday, joining Juliet, who is 2½.

"It has definitely been a game-changer being a father," Thompson said. "It's been awesome. They grow up very quickly, so it is amazing to witness that and be a part of it. It's a huge blessing."

Thompson was influenced both athletically and spiritually by Liberty Head Coach Jesse Castro.

"I really looked to Coach Castro for a lot of things," Thompson said. "Aside from athletics and wrestling, he cared more about my spiritual growth than my athletic growth, and that spoke volumes."

Castro and Assistant Coach Joe Pantaleo recruited Thompson as an NCAA Division I wrestler out of Vinton, Va., before the program was declassified to become a Club Sports team in 2011.

"It was definitely a disappointment going from NCAA to NCWA, and you hate to see any program get dropped due to Title IX issues," Thompson said. "With that being said, Liberty wrestling and the coaching staff there made the best of it that they could. I enjoyed finishing up my time there at the NCWA level. The program has remained very competitive and it allowed us to still compete at a high level."

He has maintained friendships with former teammates, including Nick Knowles and Eli Sanchez, both of whom, like Castro, are California natives.

"With wrestling, day-in and day out, there are challenges you have to deal with, leading your team and overcoming obstacles," Thompson said, noting that he and his wife have visited Knowles and his wife, both Liberty alumni, at their home in Virginia Beach. "We motivated each other and kept each other accountable spiritually and off the mat."