Wrestlers set to build on success with recruits, new facility 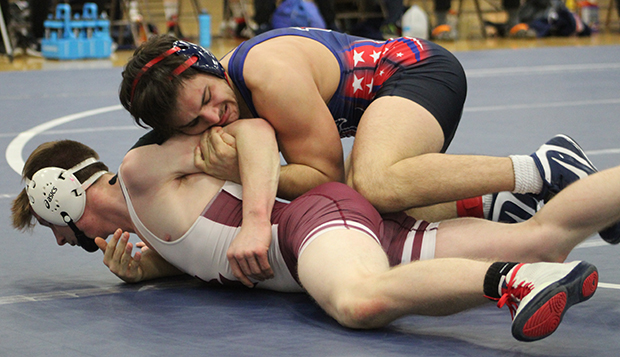 Despite graduating a large senior class from its three-time defending NCWA National Duals and NCWA Grand National Tournament champions, with more than 14 new recruits coming into the program, Liberty University men's wrestling Head Coach Jesse Castro and Assistant Coach Chris Williamson are cautiously optimistic that the Flames will continue to build on their dynasty.

"We are dependent on our leadership," Castro added. "The guys that we have as upperclassmen this year are essential, obviously. We're hoping that they're going to carry on the tradition and the mindset and culture that the team has established over the course of so many years."

Both coaches are eagerly anticipating moving into the new Club Sports Training Complex before students return this month for the start of the fall semester.

"What a great recruiting tool," Castro said. "This has been a long time waiting to have a place to call our home. We've been a transient team since the inception back in the 1970s … so to have this facility is huge for us. It is a facility that will rival (NCAA) Division I programs in our state, if not the country."

"We've kind of been in the wilderness for a while, so it is nice to really be able to look over and see the Promised Land and make that our long-term home," Williamson added. "It helps that we won three championships in an abandoned (space at River Ridge Mall). We're really grateful for all of the work Liberty did to outfit Macy's, but our guys knew that that was not our home, so we're excited to kind of build our history in our new place."

Navigating through new regulations put into place due to COVID-19 could be the greatest obstacle along the Flames' path to contending for their fourth consecutive NCWA national titles in late January and mid-March.

"There are just so many unknowns right now," Castro said. "Like many schools and programs across the country, we're on standby. Everyone's biting at the bit and waiting to get back onto the mats. I'm sure there's training going on, in basements and things like that, but for the most part, there's been a long hiatus in our sport. So we're at the mercy of the state mandates, depending on what our governor decides to do."

He has not allowed that uncertainty to dampen his spirits or lessen the team's resolve to get into the best condition possible for the start of the season, potentially in early November, as usual.

"The way we're going to approach this is that we're going to be ready to rock and roll and start training like we normally do," Castro said. "We'll have to make some adjustments, of course. We're looking into some masks, for example, that we are able to train in, for protection, and many other safety standards according to those mandates. Our goal is to be ready to go in November, but even our schedule in November is going to be changing as well. We're still in the process of looking for events. This first semester, there are a lot of unknowns and a lot of question marks."