Gollnick up for Outspoken Women in Triathlon Coach of Year 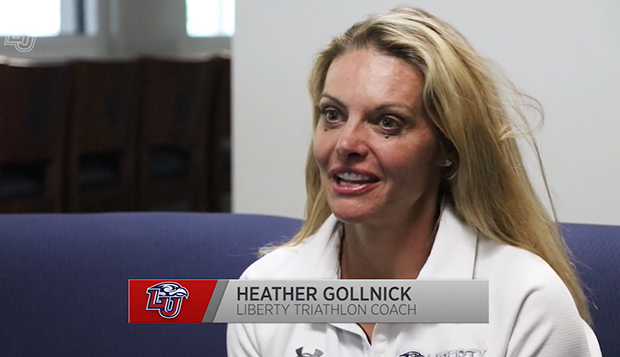 Liberty University men's and women's triathlon Head Coach Heather Gollnick has been nominated for "Coach of the Year" honors through the national organization "Outspoken Women in Triathlon."

The award winner, who will be selected in September and announced during a virtual ceremony in November, is given annually to a triathlon coach who is "changing lives, changing the game of coaching, contributing in outstanding ways to triathlon coaching, or women's equity in the sport."

Isabelle Dotlich, a rising junior from Indiana, testified to Gollnick's dedication to Liberty's program since she was named head coach in Fall 2018.

"Coach Heather has been such an influential person in my triathlon career," she said. "Her hard work and dedication to the team has made everyone a better athlete. She pushes everyone to their limits and helps them realize the potential they have inside them. Coach is a great role model for any young athlete to look up to."

Mark Fairley, a graduate student from Iowa, where he competed in cross country and track and field before transitioning to triathlon after starting his master's degree last fall, said Gollnick keeps her team spiritually focused while developing them physically.

"Coach Heather focuses on developing athletes as a whole and truly embodies everything that she coaches," he said. "She helps athletes first find a love for the sports of triathlon and then motivates them to train hard to achieve their goals. She cares so much more about the spiritual heart of the team than just about winning."

Heather's husband Todd Gollick, a USA Triathlon certified race director who serves as assistant coach for Liberty's triathlon teams, said a person in the triathlon world who has followed Heather's career in the sport started the process of getting her nominated for the award. Her nomination reflects positively on both her contributions to the sport as women's Ironman championship triathlete as well as her leadership and mentorship skills as a coach.

"It is a cool thing, especially in this day and age, recognizing that she is a proponent for the women's sport and growth of triathlon, and as an outstanding leader in her field," said Todd Gollnick, who works primarily with budgeting and arranging for the team's travel. "She is definitely the program's leader, the one with the vision. This award goes beyond her coaching to her leadership and community service."

Heather Gollnick was recently selected as one of six people to serve on a new national board, the Collegiate Club Triathlon Coaches Association (CCTCA), strengthening her nomination.

"She was asked by the leadership of that organization, which will give collegiate club teams a national voice with the governing body, USA Triathlon, to further promote and make decisions on the Club Sports level," Todd Gollnick said.

Both coaches are eagerly awaiting the return to training the Flames and Lady Flames this fall in preparation for competition, most likely in the spring.

"We are super excited about growing this into one of the top competitive programs in the country in the future," Todd Gollnick said. "We have an amazing group coming in this year, including some really talented female triathletes and some really talented guys in the sport of running who are transitioning into triathlon here."

All races organized by Kinetic Multisports throughout the Virginia, Maryland, Pennsylvania, and Delaware, have been temporarily put on hold, including the Mid-Atlantic Regional Championships at Smith Mountain Lake, which has been rescheduled from Oct. 17 to May 2 due to COVID-19.

"There are different parameters of what the training's going to look like this semester that gets more defined every day," Todd Gollnick said. "Part of her role on the (CCTCA) board is coming up with other ideas, ways that collegiate clubs could still get together and compete on a safe level."