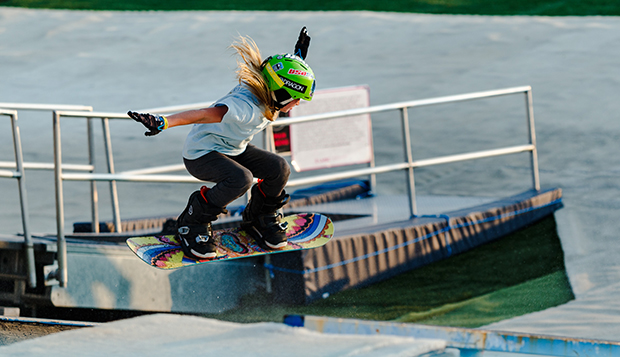 As director of last week's Next Level Summer Camp at the Liberty Mountain Snowflex Centre, Liberty University ski & snowboard Head Coach Isaac Gibson arranged for the Virginia Commonwealth Games at Liberty University Rail Jam to be moved up two days to coincide with the end of the freestyle camp.

"The kids had a great time and we just wanted to end the last night with a lot of fun and excitement," Gibson said. "It was a way to allow the kids to show off the tricks and the things that they learned throughout the last few days and just really have kind of a showcase for the parents and to take some medals home for memory's sake."

Normally, Snowflex offers four week-long camps (including three overnight sessions) throughout the month of July, utilizing a staff of 35-40 coaches and counselors. This summer's schedule was shortened to a three-day format, attracting 24 riders and skiers from around the region, mostly between the ages of 10 and 14. Gibson directed the camp with a reduced staff of eight, including assistant coaches Cole Kees and Jessica Woody and current team members Luke Linker, Tyler Wilson, Eli Haita, and Josh Heinrich.

"It's been a great couple of days," Gibson said after Tuesday night's competition. "The kids have had a ton of fun, and shown a lot of progression, and I know that they're all excited to come back in the future."

He was happy to see his staff and team members put their knowledge to the test in teaching the next generation of skiers and riders.

"It is one thing to be able to do it yourself and a whole other ballgame to teach someone else how to do it," Gibson said. "You have to be able to see what they're doing, process it, and know how to communicate it in a way that they'll be able to understand it and make the changes necessary.

"It's definitely a very rewarding thing to do because it's no longer just for you, but it's helping out others," he added. "Being able to see other people progress and really use your talents and abilities for something greater than just going out and doing it yourself definitely gets them excited."

The student coaches were challenged not only to share their love for the sport, but also the love of God with the campers, through their testimonies and servants' hearts on the hill.

"I know they really enjoyed being able to pour into younger kids and to share their passion for skiing and snowboarding, as well as being able to share the Gospel and have the opportunity to use Snowflex as a platform for Christ," Gibson said.

Linker was a former Next Level camper himself who has come full circle to work as a coach.

"It's a really cool thing to see that happen," Gibson said. "I've been a part of this camp (since 2014) and seeing him as a high school student and now coming to Liberty and riding for the team and flipping it over to where he's the one coaching the campers. We are definitely hoping to bring some of these campers in as recruits for the ski and snowboard team later on in the future."

Gibson is hopeful the month-long Next Level Development Program will continue on Saturdays this fall and that the Next Level overnight camps will resume next summer.

"Next year, we are hoping to be able to offer more time on the hill and just being able to get back to normal, for sure," he said.