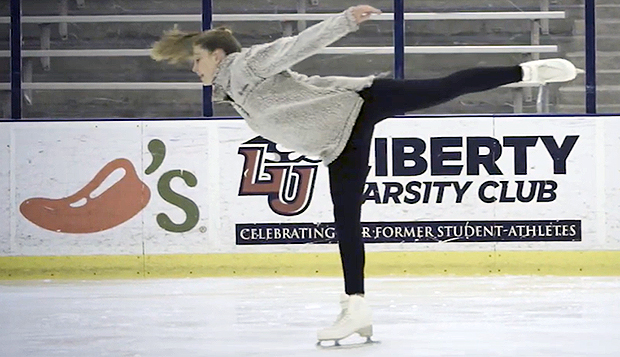 Jill Holste served as team captain for the Lady Flames figure skating team before graduating from Liberty in May.

Former Liberty University figure skating captain Jill Holste, who graduated in May with a B.S. in Business Administration: Marketing: Sales Management and Professional Selling, thrived in the sport from the time she first started skating at age 4 until midway through her collegiate career, when she struggled with a previously undiagnosed medical condition.

"I was just having a hard time skating," she said during an interview with Game On for a video feature released on Friday. "I thought that I just needed to work harder, I needed to work on my endurance. But it seemed like the harder that I worked, the worse that I got. I wasn't able to reach the goals that I wanted to and I didn't really know why."

She realized something was wrong when she faced the judges upon completing her routine at a competition.

"I wasn't able to see them because my vision was dark," Holste said.

She went to her doctor who noticed that her heart rate was high, so she was sent to a cardiologist and diagnosed with a form of tachycharia.

"When I skate, my heart rate skyrockets and my body isn't able to receive enough oxygen," Holste said.

She was told her competitive figure skating career was over and she wouldn't be able to train the way she had for most of her life.

"I was heartbroken because I felt like something was being taken away from me so fast," Holste said. "I was pretty devastated. So many things about skating have kind of shaped me into who I am, work ethic, dedication."

She talked to Head Coach Dawn Harter and Associate Coach Tatiana Payne, who found alternate ways for her to fulfill her role as captain and continue to contribute to the success of the team.

"They let me remain a part of the team and focus more on relational aspects," Holste said. "I have been able to work with recruits and plan events, so I am really thankful they let me to do that because the team was such a big support system through that time. Being at Liberty, I can't really imagine being in a better atmosphere for that."

Despite being off the ice for three months, Holste volunteered to fill in for an injured teammate as an emergency backup at the Lady Flames' home Eastern Sectional competition in mid-February at the LaHaye Ice Center. She wound up placing first in Preliminary Solo Dutch Waltz Dance and fourth in Pre-Bronze Solo Fiesta Tango Dance before winning the Solo Preliminary Dance Pattern event at the March 11 sectional event at Delaware. That helped Liberty clinch its first-ever bid to the U.S. Figure Skating Intercollegiate National Championships, set for later that month in Minneapolis but eventually canceled by COVID-19.

Through all of her ordeals, she has found strength through friendships with teammates and reading God's Word.

"The Bible talks about counting it joy when we meet trials and I have found that to be true because I have grown so much in my faith through this," Holste said. "Even if I don't know what God is doing or where He is bringing me, I can trust in the fact that I know my life is His and He has the best plan for me. Even if I don't know what that plan is, I know it's the best one."