Grishaw reflects on season, looks to next wave of success 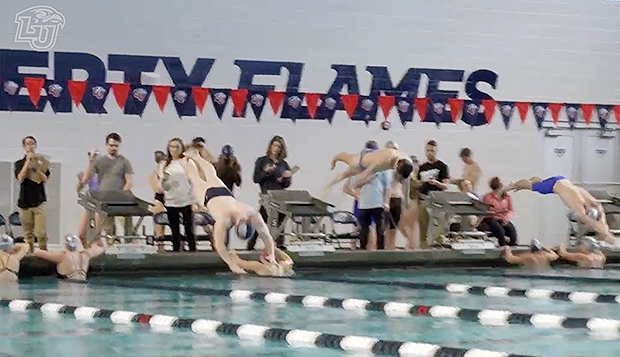 The Flames will return the majority of their swimmers from this past season and add depth with six new recruits.

Liberty University men's swimming Head Coach Heath Grishaw has been able to keep the COVID-19 pandemic in perspective in the midst of disappointment over unfulfilled dreams for his team this past spring.

"Even though (the Collegiate Club Swimming) Nationals was taken away from them, my guys did an awesome job this year and nothing will take that away from them," Grishaw said.

This summer, as he wrestled with how the 2019-20 season unfolded, God clarified Grishaw's career calling.

"In this time of being away from the guys, being forced to be still, and then being back at the pool (in early June) for the first time, the Lord really confirmed that this is my passion, this is where I want to be," Grishaw said.

He has maintained high expectations for the upcoming season.

"They've been able to stay in great shape, and I really do think we're going to be in the same place we were last year, and that's hunting for a national medal (for a top-three team finish)," Grishaw said.

The Flames enter a pivotal year, returning the majority of their leadership for a season that could serve as a springboard for the future of the program.

"The team is four years old and this upcoming year is going to be the last year for a lot of the very first guys to be a part of the team," Grishaw said. "They're seniors now, so it's almost the end of a chapter, but it's really cool because it's also a start in a way. They helped to lay down the foundation for an actual program to be built. I've got to give a lot of props to the ones that have stuck with it and helped to get the ball rolling."

He is excited to build on that foundation, and continue to create a culture that puts Christ first.

"We want to be making sure that everybody is fitting in and feeling like they are a part of something bigger than just themselves," Grishaw said. "Then also really dialing into the one thing that we all have in common, which is that we love the Lord. I think it's so special, so unique that we get to talk about that daily through devotions. I've been able to help keep that culture going during this COVID shutdown."

Strength and conditioning coach Ross Garner has played a critical role in developing dryland workout regimens for the Flames' returning and incoming swimmers through the summer.

"Ross has been phenomenal," Grishaw said. "We talk daily and he has been a great help, a great encourager, and has also been able to help the guys (remotely). Pools have been taken away, but there is still work that can be done.

"Thankfully, we have been able to open (the Liberty Natatorium) … so it has been an awesome blessing," he added. "We missed it for sure. The biggest thing right now is just knocking the dust off and the rust. It's been three months since our swimmer have been in the pool and swimming is an endurance sport, so we've got to build that back up. That's where we're going to start right now."

For those swimmers who don't have access to a pool due to COVID-19 restrictions in their home states, Garner and Grishaw have exhorted them to find alternate means of exercising and edifying their body, mind, and spirit.

"It's making sure that our mind is staying healthy and trained and that we're doing something, anything … to get your heart rate up and sweat a little," Grishaw said. "That's their responsibility, part of being an athlete for men's swimming. That's what is to be expected and they know that, so as long as they're doing their responsibility and doing their work, they're going to be fine."