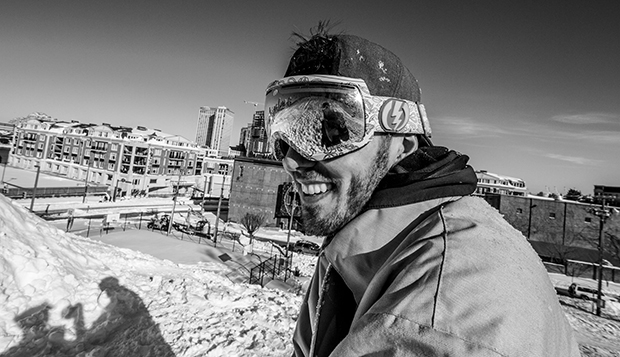 Will Scheren, who serves as Director of Online Engagement in Liberty's Office of Spiritual Development, developed a passion for snowboarding on Liberty Mountain. (Submitted photos)

Liberty University Director of Online Engagement Will Scheren ('08, '12) said his time spent as Head Coach of Liberty's men's and women's ski & snowboard teams and Operations Manager at the Liberty Mountain Snowflex Centre from 2009-13 was life-changing.

"Those were critical years for me, and really launched the trajectory that I am on," Scheren said. "A lot of the skills and relationships that have helped me to be successful over the years were all established and sharpened at Snowflex."

The Northern Virginia native, who originally wanted to attend the University of Colorado to compete on its snowboard team, helped open Snowflex in 2009 after letting President Jerry Falwell know how passionate he was about the new facility, and it opened a world of opportunities for him.

That is where he met his wife, Jordan Cummings, a snowboarder herself. The couple just welcomed their daughter, Brooklyn, into their family two weeks ago, joining 2-year-old twin brothers Cole and Hayden.

"I loved my time snowboarding with the team and coaching," Scheren said. "Opportunities I have had to travel with them and relationships I have built with my friends at Snowflex really spurred on most of the fantastic opportunities that I enjoy in my career now."

He developed a strong spiritual foundation as an undergraduate and graduate student at Liberty and on the slopes at Snowflex.

"As the coach, I understood Liberty's mission," Scheren said. "We were to be champions and win, but also do it in a way that glorifies God and make sure we were representatives of Christ while we were on the hill."

He said his successors, Flames Head Coaches Ryan Leeds (2014-18) and Isaac Gibson (2018-present), have taken that spiritual emphasis to the next level.

After graduating from the School of Business in 2008 and earning an M.B.A. in 2012, Scheren worked for six years as marketing manager for Madd Gear Action Sports, a company in Towson, Md., that builds BMX bikes, skateboards, and scooters.

"I love working with OSD and David Nasser, who has provided me with crazy opportunities to meet exceptional people that he and the Falwells bring in," Scheren said. "I also have had opportunites to travel to places like Istanbul and Rwanda to help tell stories about Liberty students having an impact all over the globe with LU Send and LU Serve. I love my job and that I get to continue the mission of Training Champions for Christ and I am thankful to the Falwell family and the Nassers for everything they have done for me and my family."

As a side business venture, Scheren is a part owner at the event company, OrcaVue, makers of the world's first 360-degree video booth platform invented by his best friend, former University of Maryland ski and snowboard Head Coach Daniel Rosenberry, who serves as CEO.

"We have taken our platform to big events all around the world, including the Super Bowl for the last few years, College Bowl Games, the NBA All-Star Game, and celebrity birthday parties," Scheren said, noting that he has traveled to set it up at events as far away as in Sweden and Dubai.

Due to COVID-19, that business has scaled back in recent months, cutting all unnecessary expenses to manage its assets.

"We are poised to jump back in (with 360-degree video events) once the world starts turning again," Scheren said. "In the meantime, I am using my spare time to help small businesses in Lynchburg with their marketing efforts."

He is eager for students to arrive back on campus next month for the start of the fall semester, and to again work with OSD and LU Stages to host Convocation services in the newly renovated Vines Center.

"I am excited to be coming out of COVID and for the world to get back to some kind of normalcy," Scheren said. "Who knows what the future holds? But I am excited for it."