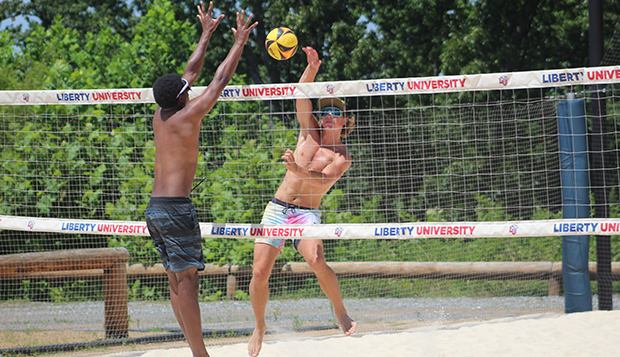 Battling heat and humidity through as many as seven matches on the day, 30 beach volleyball tandems competed in Saturday's tournament played on Liberty University's eight East Campus courts.

"It was awesome, really cool to see such a range of players," said Liberty Head Coach and tournament director Kaleb VanDePerre, noting that 17 of the teams were high school-aged girls from his VA Sand beach volleyball club. "There were a lot of new faces and competitive teams traveling from Roanoke and Charlottesville and Washington, D.C."

VanDePerre teamed up with former Flames indoor and beach standout Gene DeJesus to finish 5-1. They edged rising junior indoor teammates Lucas Marine and Tommy Speelman in three games to advance to the men's final before falling to the fellow Liberty alumni tandem of Kaden Knepper and Ryan Culkin, 21-16, 16-21, 15-13.

Previously, DeJesus and Knepper were teammates on both Liberty's indoor and beach volleyball teams.

"It was really fun to get them back out there competing against each other instead of on the same team," VanDePerre said.  "Gene was huge. He could block well and set well and I thought we played really well together."

Culkin and Knepper finished 7-0 for the tournament, not dropping a game until the championship.

"They lasted longer than we did," VanDePerre said. "Ryan blocked the whole time and Kaden's probably the best player in the area on sand. His ball control is so solid. He was able to dig a lot up defensively and his offense is so versatile that they were hard to stop consistently."

He said cross-training in beach volleyball is excellent conditioning for his men's indoor players.

"They get so many more touches in the sand and have so much more responsibility with only the two of them covering more territory," VanDePerre said. "It makes them all-around better and smarter players."

Only three of the 21 tandems in the women's field had Liberty connections, including rising sophomore Genessa Sirard, who joined incoming freshman Rylee Urban to finish 5-3. In a three-game semifinal match, they fell to eventual champions Kate Hardie, from nearby Rustburg, Va., and Erin Johnson, from E.C. Glass High School in Lynchburg, Va.

"It is up in the air whether there will be a high school indoor volleyball season in the fall, so it is a good opportunity for girls to play locally," said VanDePerre, who has taken club members to tournaments in Virginia Beach, Florida, North Carolina, and South Carolina since starting VA Sand in September and will bring a group to Atlantic City, N.J., for the July 27-Aug. 2AVP America Beach Week tournament. "We have girls getting recruited by big college programs and competing at a really high level.  As volleyball in Lynchburg gets better, our college players are getting better. It keeps reciprocating. Our goal is to host two tournaments through the fall and give the girls lots of competition."

Next up, VanDePerre will direct the men's and women's sand volleyball tournament for the Virginia Commonwealth Games at Liberty University on Saturday, July 25.