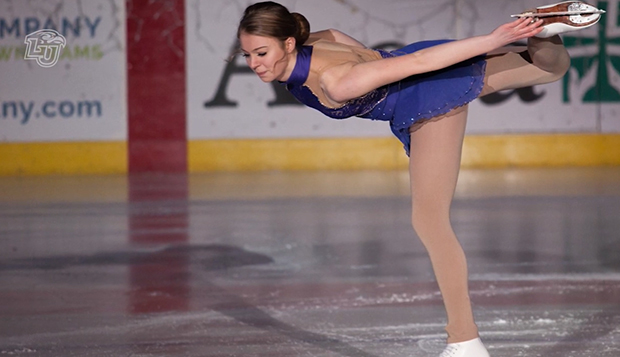 Lisi Skrien, a Juvenile-level figure skater from Minnesota, is one of 10 incoming recruits for this fall semester.

Liberty University's figure skating team could feature a roster of 25 student-athletes this fall with 12 returning from last season, 10 incoming recruits, and three others added from the Lady Flames' synchronized skating team.

"We are excited about all of them, and the maturity that they bring into the team," Head Coach Dawn Harter said. "We have a greater variety coming in and more fluidity among the different levels of skaters — from pre-preliminary all the way up to senior level — and I am interested to see how that will impact the competitive field."

Liberty qualified for the U.S. Figure Skating Intercollegiate National Championships for the first time this past spring, and planned to send 18 team members to the March 27-29 competition in Minneapolis before that event was canceled by COVID-19.

"Collegiate skating is more of a team sport, and that was how we did so well last year, by making sure we had a roster that could fill all 30 starts, ready to go at every competition," Harter said. "All of the skaters have to do their part, and do their best at whatever level they skate at. They all seem to be bringing in great quality as well as team character."

Jamie Gordon from Florida is the only incoming Senior-level skater.

"She brings a lot of quality to her skating and we are looking forward to seeing what she is able to do," Harter said. "She comes with a good, solid background, and is a humble skater, but when she's out on the ice, she's a hungry skater."

Team tryouts will likely be postponed until October to give student-athletes the opportunity to skate and practice and see if they are truly committed to the program. Harter will be assisted by synchronized skating Head Coach Emily Hughes and former Head Coach Tatiana Payne as well as Sue Tuck, who works with the dancers.

"We are looking for individuals that have that competitive mindset that are looking to go all the way to nationals," Harter said. "Once they get here, the next step will be tryouts, which will determine if they can manage their schedules. I feel pretty strongly about the majority of them."

Two team captains designated for this season are among six local students who have had access to the LaHaye Ice Center this summer — rising senior Angela Bosher, from Forest, Va., a third-year captain who will skate a Novice short program and Junior long program as well as competing in Senior free dance and Junior solo dance, and Marissa Harter, a sophomore Preliminary skater and solo dancer from Concord, Va., who is working on a Juvenile free dance.

Liberty will host the first Southeast Sectional competition, set for Feb. 13-15, with a second hosted by Penn State from March 6-7 and a third at Princeton (N.J.) on March 20-21. The top four teams will qualify for the Intercollegiate National Championships Final, hosted by Adrian College (Mich.) from April 16-18.