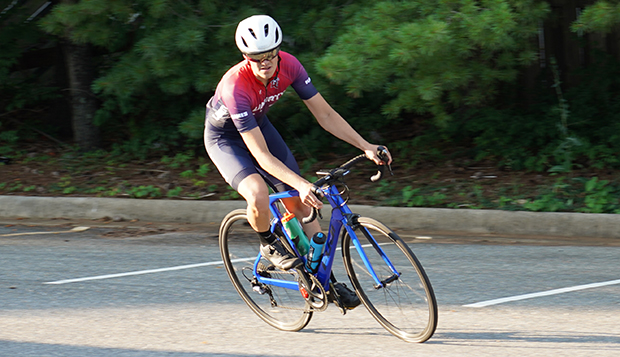 Just before the start of the race season this past spring semester, Liberty University men's cyclist Gunnar Ingram, also an Army ROTC cadet, received special permission from his Eagle Battalion commander, Major Jason Winkelmann, to have his cycling workouts take the place of his physical training.

"I found out in February that he was doing full ROTC PT in addition to heavy training for cycling and I said, ‘How in the world would you possibly have the time to recover from this?'" Flames Head Coach Timo Budarz asked Ingram, a rising senior criminal justice major who is also active military.

"He thought it was amazing that I was cycling and also doing a lot of extra physical activity and they were conflicting," Ingram added, noting that his weekly ROTC requirements were two hours of high intensity workouts that included weight training and running on top of an average of 12 hours of cycling.

Ingram, 22, from Sharpsburg, Md., enlisted in the U.S. Army out of high school and was a specialist based in Fort Hood, Texas. He spent five months in South Korea before taking a year of classes through Liberty University's Online Programs and enrolling in the "Green to Gold" scholarship program.

"It takes a year for the application process," said Ingram, noting the recipients must stand out in both their physical fitness and academic credentials. "God's will put me here. I prayed really hard for it and it happened."

The former Eagle Scout, who ran cross country in high school, didn't start cycling until he picked up mountain biking in Texas and transitioned to road racing when he arrived at Liberty last fall.

"I found out that I really loved road cycling," Ingram said. "So far, I've done road races and a criterium and I definitely enjoyed that the most."

"It's lap after lap and it's just an adrenaline rush for me," Ingram said. "It's fun."

Budarz, a sprint and track cyclist, said Ingram has untapped potential in the sport.

"Gunnar is a model athlete as a coach," he said. "He was a category C cyclist this year, but there's no doubt he is going to be racing in Category A when the (Spring 2021) season starts. His power numbers from when he started racing in early spring are 20-30 percent stronger now. He has just made leaps and bounds, non-stop gains since February."

Since having their collegiate racing season canceled by COVID-19 in mid-March, Ingram has trained four to five days per week with Budarz, usually for two hours a day and as many as three or four on Saturdays.

"Everything Timo has recommended, I have strictly gone by as far as training and how to eat and it has worked out for me," Ingram said. "Since our race season ended because of COVID, I have been riding a lot more and have definitely seen steady progression in my cycling. It's kind of a blessing for me in a way. If the race season kept happening, I don't think I'd be where I am currently."

"COVID has only made my training better," Budarz added. "Sometimes, racing beats you down instead of building you up."

They have often been joined on rides by Bethany Matsick, a converted high school swimmer who excelled in her first season with the Lady Flames as a senior.

Matsick, who will enroll in a dual graduate program combining engineering and data science this fall, could enter the Sept. 10-12 USA Cycling Collegiate Track National Championships, held on an outdoor track in Indianapolis, if that event is not canceled by COVID-19 as most other USA Cycling national championships were on Wednesday.

"Bethany, she's great motivation to see her right there next to me, pushing me, and so does Timo," Ingram said. "She's got very high potential, world-class numbers. It's really cool to have her for another year and watch her destroy the competition."

He has high expectations for the Flames next spring, when he and Ben Cook will likely join graduate student Freddie Shashaty and rising senior Todd Yoder in Category A races, drafting off one another and developing team tactics.

"I just want to do the best that I can," said Ingram, who has aspirations of making the U.S. Army team after graduation next May, when he hopes to be commissioned as an intelligence officer for the last three years of his commitment. "It comes down to God's will. If cycling's not something that's going to be in His will for me, I figure I'll do the best that I can to glorify Him this spring and if this doesn't continue, I'll just train on my own and do what I'm called to do." 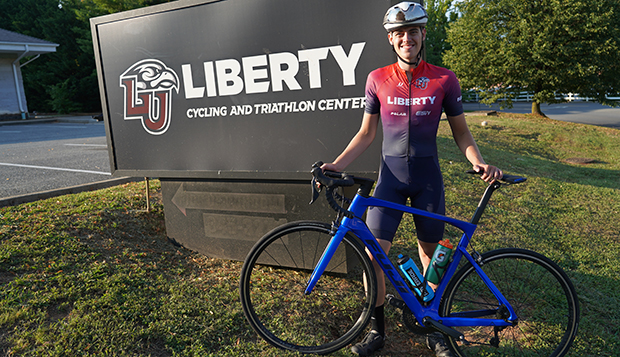