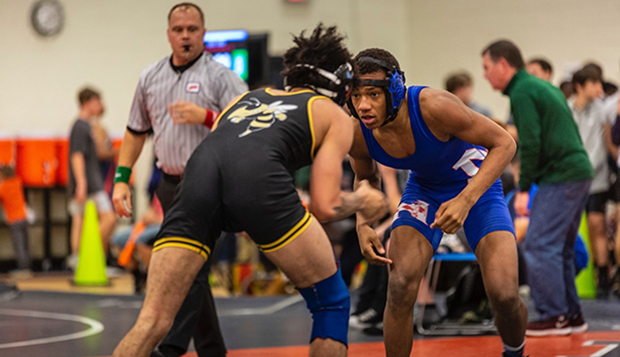 A leader by example with a tireless work ethic, incoming Liberty University men's wrestler John Stuart modeled perseverance and confidence in advancing to the VHSL Group 5A state championship match as a senior at Norview High School in Norfolk, Va., this past season.

"The kids kind of follow his lead and model what he does on the mat and off the mat," Norview wrestling coach Keith Goff told the Virginian-Pilot. "He's worth the price of admission. Non-stop action. He goes and he gets after it."

Growing up as the middle child in a family of five — the only son of a father, John Sr., who competed in boxing and mixed martial arts, and mother, Alicia, who has trained in body building — Stuart developed a passion for wrestling in middle school.

"As a kid, I used to play fight and wrestle around with my sisters and my family," said Stuart, who also played baseball and football growing up and ran cross country in high school. "Wrestling almost came naturally for me. Honestly, I feel like I fell more in love with wrestling than I did the rest."

He credits former Norview teammate Keonte Davis — who competed for the Flames at 133 pounds this past semester before opting to switch from reserve to active military duty this spring — for developing his talents on the wrestling mat.

"Keonte was at 126 and I was at 113, and having him as my wrestling partner my freshman year, he most rapidly increased my skill level," Stuart said. "He was bigger in size and stronger than me, and his skill level was above mine. My goal was just to beat him because I knew if I could beat him, I could beat the rest of my contenders. My freshman year, I came close, and I finally beat him my junior year, when I was in about the same weight class."

Stuart wound up qualifying for the state tournament all four years of his career at Norview, placing sixth his sophomore and junior years before his runner-up finish at 132 pounds to a three-time state champion this winter.

By his example, he inspired others to join the Pilots' wrestling program, which grew from five wrestlers his sophomore season to a team that posted a 25-2 dual meet record his senior year, when Stuart finished 41-4.

"He's very competitive and we need him," Flames Assistant Coach Chris Williamson said. "He has only wrestled for six years and got all the way to the 5A state finals, so he has a natural knack for wresting. He is very athletic, very smart, but very humble. He has a gentle, humble way about him, and he is very coachable."

Stuart visited Liberty for College For A Weekend (CFAW) in April 2019 and returned this past April, when he made his commitment to join the Flames. On that visit, he saw the new Club Sports Training Complex that will house men's and women's wrestling as well as the men's and women's crew and taekwondo and women's gymnastics teams.

"I've seen the development the university is putting into the program," Stuart said. "It is going to be an amazing wrestling room. It could really be compared to an NCAA Division I-level wrestling facility."

Stuart has risen through the ranks in wrestling by improving his fitness and endurance by running cross country, sharpening his technical skills on the mat through out-of-season tournaments, and increasing his strength through late-night and early-morning weight-training sessions.

"I hit the gym a lot my junior and senior years, and after the season was over, I would go to work at Chick-Fil-A and start a workout at 11 p.m. at night or the next morning at 5 a.m.," he said. "Workouts-wise, I would bench press and do lots of pushups and lots of crunches."

He was inspired to pursue a degree in exercise science at Liberty to become a personal trainer and eventually a physical therapist after enduring a severe lower leg and ankle injury at a wrestling camp in October of his sophomore season. Through the PT he received, he was able to return to the mat in February before qualifying for his second state tournament.

In cross country the following fall, he came to the realization that there is a difference between running and wrestling stamina, though both sports pushed him to compete for the ultimate prize.

Williamson and Flames Head Coach Jesse Castro have inspired him to take his game to the next level as he transitions from high school to NCWA wrestling, competing with a strong corps of incoming lowerweights who will sharpen his skills at Liberty as Davis did at Norview.

"I plan to make an impact on Liberty's ranks and take home a championship ring as a freshman," said Stuart, who will contend for starting time at the 141- and 149-pound weight classes for the three-time defending NCWA National Duals and NCWA Grand National championship Flames. 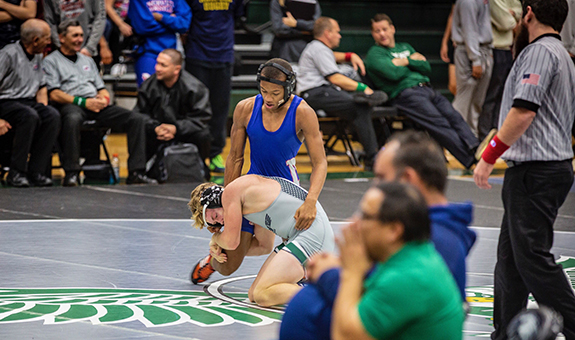 Stuart, who reached the Group 5A state finals his senior season, maintains control in a match.