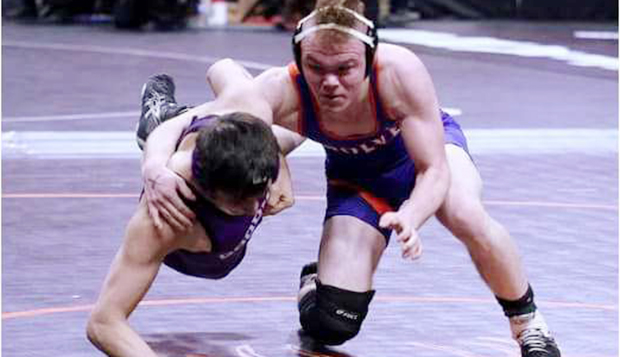 Qualifying for the Minnesota high school state wrestling tournament for the first time as a senior only to be eliminated in the opening round left something to be desired for Ted Stacey, who will continue his career as a 157-pounder on Liberty University's men's wrestling team this fall.

His Long Prairie Grey Eagle Wolves squad went on to capture its second consecutive team crown, intensifying Stacey's desire to contribute to a championship program such as the Flames, winners of the past three NCWA National Duals and NCWA Grand National tournament titles.

"My junior year was my breakout year, when I had 30 wins, including 20 pins, and ended up one or two matches away from going to state," said Stacey, who compiled a 94-66 career record, capped by 40 wins and another 20 pins his senior year. "I finished just shy of 100 wins and 50 pins for my career, so I was not sure I wanted to end that way."

"I credit cross country for a lot of my wrestling success because the way I wrestled, I pinned a lot of people in the third period just from being able to outlast them," said Stacey, who is looking forward to the longer match times in collegiate wrestling, starting with a three-minute first period. "There were a few matches in high school I could have won if I had an extra minute."

Stacey is the second of five sons of Liberty alumni Lori and Matt Stacey ('94), a South Dakota state champion who wrestled one season for the then-NCAA Division I Flames in 1990-91 before meeting his future wife their freshman year and focusing on his degree in pastoral leadership for his final three years.

"She was kind of distracting for his wrestling career," said Ted Stacey, now one of 10 children between the ages of 2-23 homeschooled by Lori, who applied her elementary education degree in their home.

Older brother, Luke, was a four-time high school wrestling state qualifier, but did not continue his career at Liberty, where he studied electrical engineering before graduating in 2019. Older sister, Katie, a rising junior camp and outdoor adventure leadership (COAL) major, is performing her internship at the Hydaway Outdoor Recreation Center this summer.

In November, Stacey flew to Lynchburg, Va., to surprise Katie for her 20th birthday and spent a week touring Liberty.

"I hadn't committed by that point and wasn't sure that I wanted to wrestle in college," he said. "Since then, with the wrestling season ending the way that it did, I felt that I had more left in the tank and I didn't want to be done yet."

"(Cantrell) is a returning national champion and two-time All-American, so I am looking at that as a great learning opportunity until he graduates and I get my shot," Stacey said.

"Ted is a solid wrestler and we are hoping he's going to be a pleasant surprise for us," Castro added. "He's at a weight class where we could really use his depth with Chad going down to 149 this season. I'm hoping he steps right in an makes a name for himself."

In the offseason, with the local fitness club shut down by COVID-19, Stacey is focusing on weight training in his back yard when he is not working one of his three summer jobs.

"I have hit the weights and the cardio hard, doing a lot of running, a lot of endurance work, trying to get into the best shape that I can and just packing on muscle," Stacey said.

Stacey plans to enroll in Liberty's School of Business to pursue a business administration degree in project management. He said juggling his academic and athletic commitments won't be a problem.